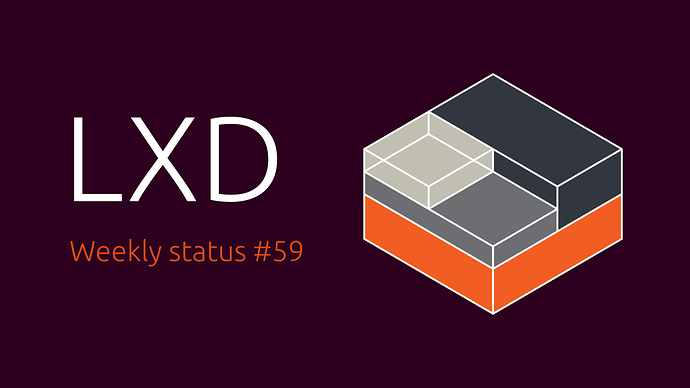 A lot has happened this week, we started by switching dqlite implementation in LXD to the new one @freeekanayaka has been working on for the past few months.

This required changes to our CI, packaging and Makefile to handle it but the result is up to 10x database performance in some cases (mostly for clusters).

We followed that up with quite a few bugfixes, including better handling for host shutdown in clusters, spent a while figuring out how to handle file capabilities during remapping and added progress reporting to a few more lxc subcommands.

On the LXC side, we’ve been busy preparing for a security update, more details below and doing a number of other bugfixes.

@brauner also wrote a blog post about file capabilities on Linux and in containers.

A security fix for LXC was released earlier today, this affects:

Description of the issue:

lxc-user-nic (setuid) when asked to delete a network interface will
unconditionally open a user provided path.

This code path may be used by an unprivileged user to check for
the existence of a path which they wouldn’t otherwise be able to reach.

It may also be used to trigger side effects by causing a (read-only) open
of special kernel files (ptmx, proc, sys).

This was reported to us by Matthias Gerstner from SUSE and @brauner on the LXC team took care of finding a workable solution and
preparing the needed updates.

Linux distributions were privately notified with about a week notice and
so should have security updates ready for this already, or will shortly.

We will not be issuing emergency release tarballs for this issue so if
you’re maintaining your own build, you should be cherry-picking one of
the fixes above. We do however intend to release LXC 3.0.2 very shortly
which will include this fix among other traditional bugfixes.