Setting up home network with KVM and LXD

I’m looking for guidance in setting my home server. I have a HP Proliant Gen 8 Microserver G1610T box upgraded with 12GB RAM.
I was using it and plan to continue using it with some critical applications AND as a homelab to test an play with new OSes, technologies and solutions.

In short, my plan is to isolate my production environment from testing ground, so I won’t mess up with services that should be up and running most of the time. Also, I am occasionally away from the physical box so if I screw up network configuration (which I’ve done…) or my host won’t boot up I’m f.u.b.a.r.. For that reason, I decided to have one VM for all critical applications and others for testing, according to my needs.

To achieve further fail-proof isolation and preserve from config contamination, I want to put those critical application in containers, preferably LXD ones because I then can provision them with ansible without much tweaking (the same way I’d done without any layer of vm / container).
Because my server is in my home behind my home router in order to access it from the internet I have to forward ports to it, so I my solution is as follows

Below I attach a diagram of what I plan to setup and would like to ear some feedback about it - what are possible pitfalls and drawbacks and what should I do differently. 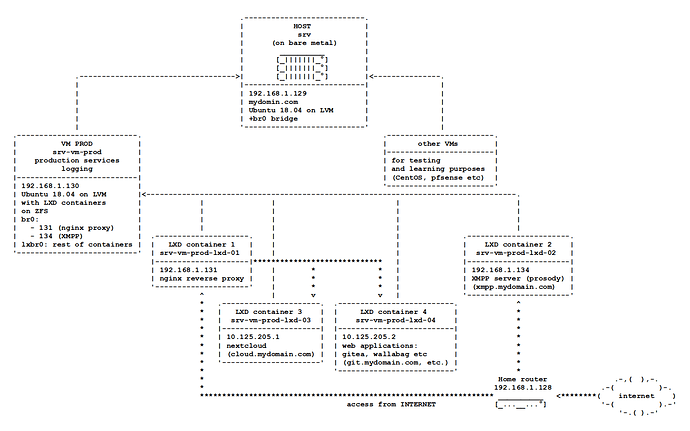 Any additional comments and shared experience would be much appreciated.

Automate with Ansible, Salt, Puppet, remote API requests with curl and your own scripts, whatever takes your fancy.
With 2 nics either bond them, give the bond a L3 interface and route to your virtual networks which reside inside your machine (requires routing changes on your lan most likely) or Nat on egress and port forward on egress.
Alternative is bridge the bondX interface with your lxd / kvm bridge and the virtual machines / containers get an address on your lan.
More complex things are available like what I do, with and ovsbridge bridged to your bondX and trunk specific vlans from your switch, you can isolate that way if needed if you want to put samba on its own vlan. So many ways with the networking really there is no right way. I would advise routing to your containers if you have a decent switch/router capable of l3. next hop will be your micro servers address from your core switch / firewall.
if your really bothered about isolation then use them as two separate nics, one can be used for samba and connect it to its own vlan on the switch and then firewall the traffic at your router.
you also have the option of VRF on linux now with which you can create a bridge and put it in its own routing table for extra security. Its also useful for management interfaces. just in case you muck up your main routing table and kick yourself off the “in band” management address.
you can create and mount storage volumes in lxd if thats what you mean. zfs, btrfs etc
I’m not a storage person at all, but why use LVM if your using ZFS I would just give lxd a par of disks as block devices and they are owned by zfs entirely.

I’ve not noticed any performance hit with zfs

I even run my kvm virtual machines in a lxd container, whether or not that is advisable or not, I’m not sure!

Other option is run proxmox-ve and let that deal with kvm then install LXD via snap, I can vouch for that I have it running on a hetzner server,.

I am in the middle of constructing my system and I run into some fundamental issues that I have to reconsider before moving on. The most important of them is how to share storage between Host, VM an LXD containers.

To sum up my draft setup:

Now, I want to make the best use of ZFS storage that HOST OS takes care of. However, the pool cannot be managed neither by VM or LXD because of the virtualization layer. So my solution is:

I guess at this point I realized I am overcomplicating this and going against KISS rule. I know I can just store all LXD containers directly in the host, but my reasoning to the initial solution is:

I am open to suggestions and certainly would like to hear an opinion from someone more seasoned than me. In particular, I have following questions:

I would put LXD on the host, it’s very portable and easy to backup with lxc copy, lxc move, lxc export (to file) and soon to have lxc refresh for incremental updates. Just make sure it has a zfs dataset as a source for storage.

Seem to be loosing the benefits of lxd sticking it in a VM other than for doing test/proof of concept work.

And yes will be more “secure” in a VM if you are trying to keep the security folk happy. No shared kernel with the host.