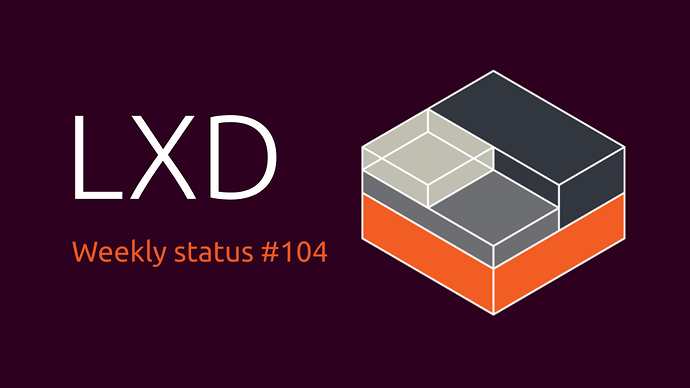 Weekly status for the weeks of the 24th to the 30th of June.

This last week saw the addition of 2 new features in LXD.

Firstly a new storage driver has been added that provides CEPHFS as an option for container custom storage volumes. This is in addition to the existing CEPH storage driver that LXD has. The difference between CEPH and CEPHFS is that the former uses block level access to the CEPH cluster whereas CEPHFS uses a higher level POSIX filesystem API to CEPH.
For more info see https://lxd.readthedocs.io/en/latest/storage/#cephfs

The second new feature is a preliminary release of the isolated networking feature. This preliminary release provides IP filtering for containers with statically assigned IPs when using the bridged NIC type. This prevents containers from spoofing packets from IPs other then the ones assigned to them statically. It can be controlled by 2 new container configuration keys; security.ipv4_filtering and security.ipv6_filtering respectively.
For more info see https://lxd.readthedocs.io/en/latest/containers/#nictype-bridged

LXD master also transitioned from our old implementation of dqlite (mostly in Go) to dqlite 1.0 which is mostly based on C libraries and re-designed to improve performance and debug-ability of our clustering logic. This will ship in LXD 3.15 and then make it to LXD 3.0.5.

There were also several bug fixes in LXD and LXC.