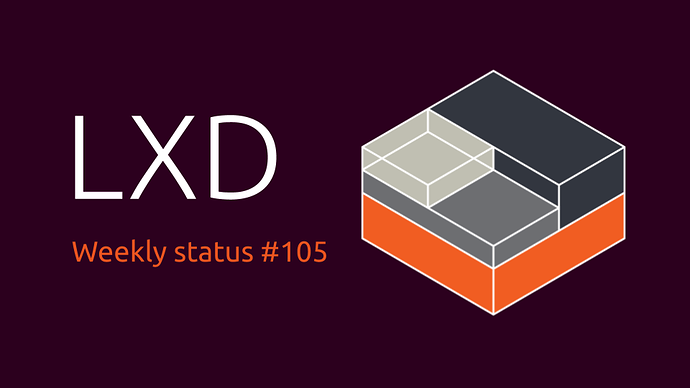 Weekly status for the weeks of the 1st to the 7th of July.

This last week saw the addition of support for dynamic IP allocation when using IP filtering in LXD. This means that when using the bridge NIC device type with security.ipv4_filtering or security.ipv6_filtering you now no longer have to specify a static IP for the security filters to be applied. Instead an available IP is picked from the DHCP range (or IPv6 EUI64 address) and used for the filtering and DHCP assignment. This IP is then statically allocated to the container.

The new LXD resources API has been merged too. This complete rework now exposes a lot more information about CPU and CPU topology, exposes NUMA information for memory, adds support for SR-IOV and exposes DRM information for graphics card, adds reporting of network devices (ethernet & infiniband) and reporting of disks/partitions.

Additionally there have been some networking fixes and re-organisations to support the forthcoming LXD devices rework. There were also some bugs fixed related to LVM thinpool usage reporting and ephemeral snapshot restoration.

On the LXC side, networking code has been unified between privileged and unprivileged containers, allowing the LXC_PID environment variable to be exposed to lxc.net.[i].script.up hook scripts in both cases. This allows hook scripts to enter the namespaces of the containers if needed.

On the distrobuilder side, a first pass on adding support for Ubuntu Core was merged, and work continues on improving this so that it works on more build environments.

We are also planning to release LXD 3.15 later this week, and are preparing releases for LXC 3.2 and LXCFS 3.1 in the next couple of weeks.