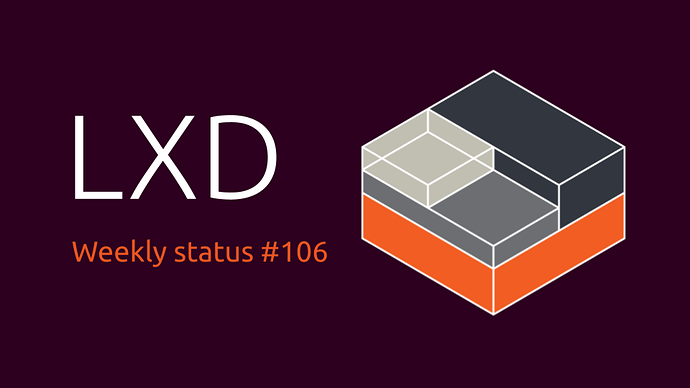 Weekly status for the weeks of the 8th to the 14th of July.

This past week has been all about finishing off features for the LXD 3.15 release and preparing for the imminent LXC 3.2 and LXCFS 3.1 releases.

On the LXD side, the bulk of the work has been on continuing improving the seccomp filtering feature and re-working cluster heartbeat notifications to be more efficient. There has also been work done on the dqlite side to make database updates more efficient so as not to increase container start up time.

There is a new feature in LXD that now allows you to specify the UID and GID of a process to be run when using lxc exec.

For more information on all of this, please see the LXD 3.15 release announcement.

On the LXC side, there have been changes related to the seccomp filtering feature, and a new networking veth router mode has been added.

The veth router mode adds a new mode setting to veth network config which allows the host to act as a router for the container’s IP addresses. This allows hosts that are running routing protocols (such as BGP) to detect static routes to container IPs and advertise them to the wider network.

When combined with the l2proxy feature it also allows containers to have static IP addresses on the host’s external network without having to configure bridges or running routing daemons, and unlike IPVLAN, allows host to container communication and full netfilter functionality. It also prevents containers from spoofing IP addresses they have not been assigned.

An example network config for this:

On the distrobuilder side, work has been continuing on adding Ubuntu Core support and adding cloud-init functionality to all distro images that can support it to make configuring settings inside containers easier. At this point, all existing images have transitioned to distrobuilder and our legacy build code has now been removed.