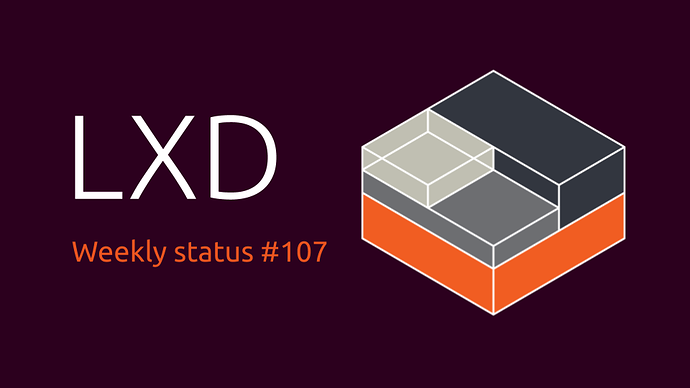 Weekly status for the weeks of the 15th to the 21st of July.

This past week has mostly been a maintenance week with bug fixes, code re-organizations for our larger projects, and other small improvements.

LXD 3.15 started rolling out to our stable users halfway through the week.

Several cluster heartbeat related bugs since the LXD 3.15 release have been fixed, with the aim of reducing the time it takes for cluster membership changes to be applied throughout the cluster nodes.

A number of regressions/bugs in the new dqlite 1.0 backend used by LXD 3.15 were also tracked down, resolved and rolled out to affected users.

The ability to create an empty container has been added to LXD, which is useful if you already have a rootfs you want to use for a container.

On the LXCFS side, several improvements to the way CPU usage is accounted for have been added.

The LXC 3.2 and LXCFS 3.1 releases got delayed a bit and are now expected for early this week.

The ability to create an empty container has been added to LXD, which is useful if you already have a rootfs you want to use for a container.

Is there any documentation about it?

lxc init now has a --empty option you can pass which will create an empty container.

Moving stuff into it would still involve you mounting its filesystem and transferring data manually though, or you could use lxd-p2c which does effectively that for you over the migration API.

or you could use lxd-p2c

Is there ready migration script from OpenVZ 6?

I wrote bash script for this, but have to set all settings like cpu numbers and memory limit manually now. Is there a better way?

I’ve not heard anyone having such a script, you may want to publish yours so that others can make use of it.

lxd-p2c certainly can work for the data migration bits but having something convert the configuration sounds useful.