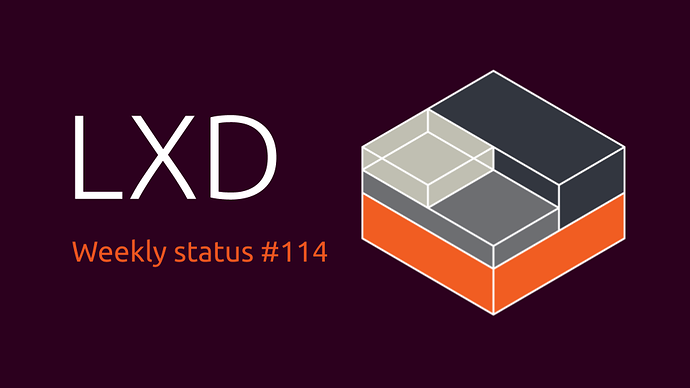 Weekly status for the week of the 2nd September to the 8th of September.

This past week saw the release of LXD 3.17 which includes most of the changes added to LXD in the last week.

LXD now has the ability to accept configuration from STDIN for lxc init and lxc launch commands, which eases the creation of containers with complex configuration (see LXD 3.17 release notes for more details and example usage).

The device re-work project has been completed, with the remaining unix-char, unix-block and disk device types being moved across. Work has now started on re-working the storage API in a similar fashion.

A bug in the way client URL paths were encoded that prevented modifying resources that had spaces or other non alphanumeric characters in them has been fixed.

On the LXC front there were some improvements to cgroup management and loop device setup.

There was also an improvement added to LXCFS to make the /sys/devices/system/cpu/online emulation consistent when using CPU quota.

@brauner and @stgraber from the LXD team are in Lisbon, Portugal this week attending and presenting at the Linux Plumbers Conference (details below).