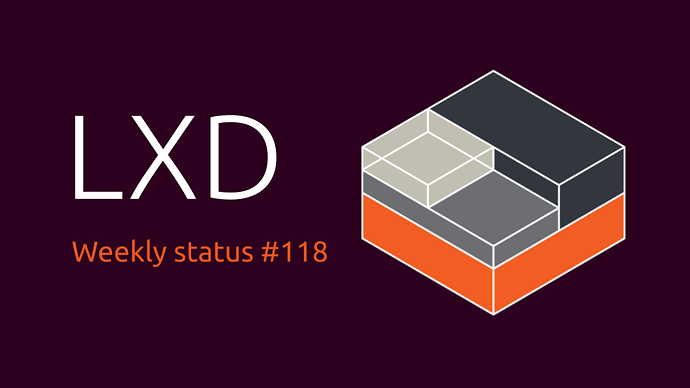 This past week has seen the addition of a code of conduct and security policy for LXD. We have also continued with the internal code re-organisation to accommodate virtual machine support. There have also been several other small changes; a bug preventing MTUs >1500 on bridged and p2p devices has been fixed, iptables modules no longer need to be loaded if you are not using the firewall feature, and image expiration date can now be modified.

LXD 3.18 then got released with all of those included.

On the LXC side, a new config option lxc.autodev.tmpfs.size has been added allowing the tmpfs size to be increased (or decreased) from the default 500KB size. This allows fixing problems caused by syslog consuming all space in the auto generated tmpfs mount in rare specific circumstances. There have also been improvements on detecting parent process death to avoid certain edge cases that will cause the pdeath signal to be missed.

Travis-CI announced today that you can now run your builds on arm64.
This is the first of hopefully many more additional architectures for Travis jobs.

This feature is using a reworked infrastructure to run Travis jobs which is backed by LXD and was setup in collaboration with the LXD team.

The end result is instances that are running within 2-3s from being requested, running with no virtualization overhead and having the ability to use unused CPU resources on the system when not under load.