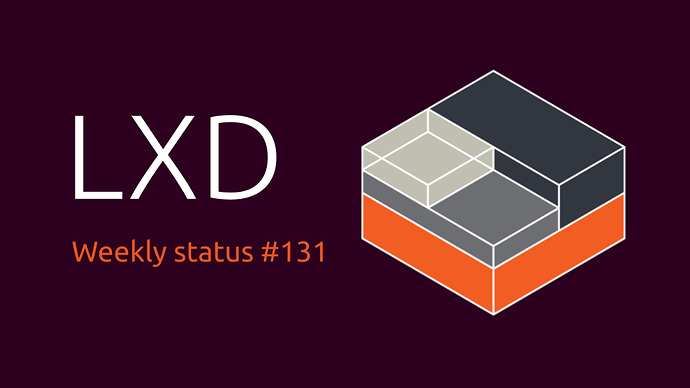 Last week was a busy week with the team preparing for the LXD 3.19 release midway through the week. For more information please see the release notes.

In terms of LXD, last week saw the new LVM storage driver get merged (with VM and volume striping support).

Volume striping allows an LVM storage pool to use an existing LVM volume group that spans more than one physical device to spread volumes across multiple devices, which can help I/O performance.

To do this, create a storage pool from an existing volume group that is backed by multiple physical devices, and specify that new volumes should be created with stripes:

Note: When using LVM thin pools (the default) LVM only supports striping of the thin pool volume itself, so it must be specified at the time of LXD storage pool creation and not at volume creation time.

Virtual machines also gained the ability to have additional disks added to them using the familiar command format:

New disks will appear as new block devices inside the VM.

When running commands via the lxd-agent inside a VM using lxc exec, a bug was fixed to support window resizing.

Multi-architecture clustering support was also added, allowing an LXD cluster to be comprised of nodes that have different architectures. When deploying a new instance only nodes running an architecture that matches the source image architecture will be selected as a target.

The LXD resources API now outputs the device_id for a disk.

On the LXC front, several bugs were fixed, including restoring the ability to specify a fixed MTU on a bridged or routed network device, a memory leak in the cgroup initialisation, and an issue where an error in a container’s config file could leave an orphaned process and lock when start up fails.