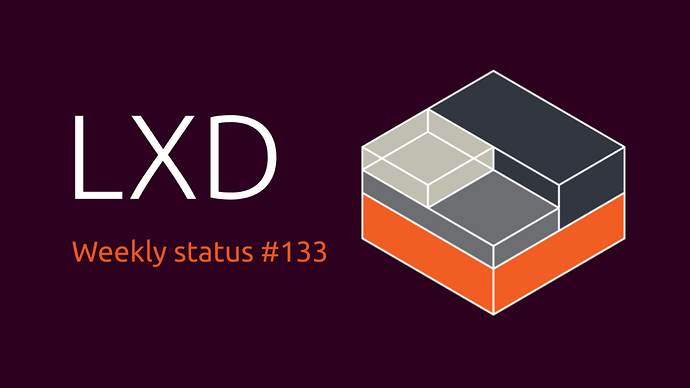 In the past week LXD 3.20 has been released which includes most of the changes added in the past week so for more details please check the release notes.

We have been focusing on our new virtual machine feature and have added support for physical and sriov NIC devices using the vfio-pci kernel module.

The REST API has also gained the ability to do server side filtering of results, for more info on this please see the REST API docs.

There have also been several bug fixes related to the new storage layer.

The AppArmor rules were modified to allow containers running systemd to use the “Project*” features to restrict services running inside the container.

A new container device type unix-hotplug was added, for more info on this please see the the LXD 3.20 Release Notes.

On the LXC front, a new config key was added lxc.selinux.context.keyring to allow the SELinux context under which the container’s keyring should be created to be specified. This allows applications inside the container that expect that the keyring is labelled with a certain context to run normally.

On the LXCFS front, an improvement to SWAP accounting was added to better handle conditions where swap usage is reported to be < 0.

Finally, distrobuilder had a fix for Alpine edge images applied that updates the apk repository config inside the containers to target the edge repos.

Part of the #LXD team was attending FOSDEM over the weekend, running the containers devroom and also presenting on a variety of topics:

Videos are being edited at the moment and are slowly starting to show up on the FOSDEM website.