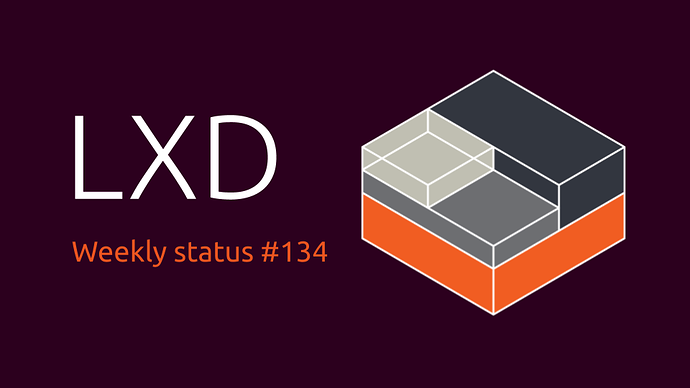 The past week has seen the new ceph driver land for LXD. This is the last of the new storage framework drivers, and means that we can begin to remove the old storage layer entirely from the LXD code base. A ceph related bug was also fixed that was preventing RBD unmapping when a container was being stopped.

Also on the storage framework front, a database patch has been added to ensure that LVM storage pools have an lvm.vg_name config property defined, and if not then set it to the storage pool name. The reason for this is that some older pools created using the old LVM driver did not define this setting by default. Additionally a fix for the ZFS driver was added that tweaks the argument ordering used for the internal ZFS commands to fix an issue where some versions of the ZFS tools required arguments specified in a particular order.

Several fixes were added to allow LXD to be built on CentOS 7 (which uses an older version of glibc).

On the VM front several optimisations have been added; firstly, the network mode used for bridged, p2p and macvlan has been changed to Qemu’s vhost_net as this is the current recommendation and should result in a significant performance improvement for networking. Secondly we have enabled discard mode on virtio-scsi so that file backend storage devices can shrink as blocks are released in the VM, returning them to the host OS and SSD backing devices can also better manage their blocks. A bug has also been fixed in the lxc exec command for VMs where if a terminal window was closed then the websocket and connected lxc process would not properly disconnect, leaving hanging lxc processes. VMs that are not running the lxd-agent and are using bridged NICs can also now benefit from showing their IPv6 address in the lxc list output as we now interrogate the IPv6 neighbour entries on the host OS and use the address that matches the VM’s MAC address if the host knows about it.

Also on the networking front, initial support for tying NIC devices to their associated networks has been added. For bridged NICs you can now specify a network property that is the name of the LXD managed bridge network. This replaces the nictype, parent, mtu and maas.subnet.* config keys, as these settings are then inherited from the linked network. A bug was fixed with bridged NIC IPv4 filtering mode where if IPs were defined statically and the instance was connected to an unmanaged bridge, when the container was stopped not all of the ebtables filter rules were cleaned up.

On the LXC front, two bugs in the config parser were fixed.

Part of the #LXD team was attending FOSDEM a week or so ago, running the containers devroom and also presenting on a variety of topics:

All video recordings are now available and can be found through the links above!