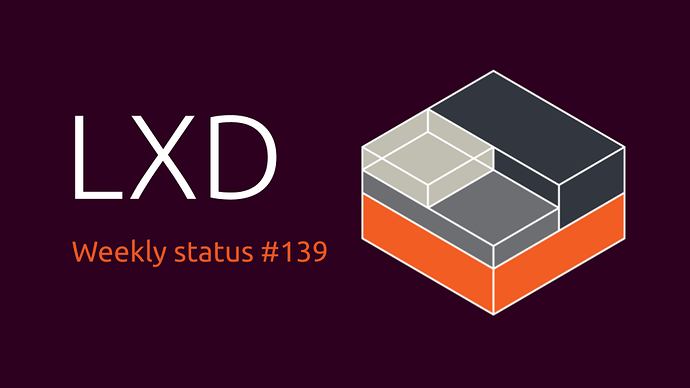 In the past week LXD has gained two new features related to Projects.

Firstly, we have added Project restrictions, these allow the administrator to restrict what features can be added to containers created inside a project. For more information see the restricted.* keys in the Project documentation.

On the VM front, several improvements have been added as we continue to bring the VM feature set to parity with containers. VM Migration support was added, this allows for both cross-pool (on same host) and cross-host copy/move operations for VM instances. VM image publishing and unified image import support was also added. Additionally a bug was fixed in the lxc exec feature for VMs that could cause an infinite polling loop when trying to connect to the lxd-agent in a VM when it wasn’t running.

A fix in distrobuilder was also added related to starting the lxd-agent in OpenRC based VM guests.

On the LXD networking front, following on from our recent nftables support, we have had some reports of nft not working properly on older systems. After investigating we have added a fix for the way that chains are removed to support older versions of nft. Additionally we have also seen that old kernels have issues performing NAT with nftables when the iptables modules are loaded first (even if there aren’t any rules added). As such we have added a restriction for running at least kernel version 5.0 or above before LXD will detect that nftables can be supported.

On the LXC side this past week there has been some work done on hardening the code and cleaning up the code to ensure that resources are released when not being used. Additionally a change was added to ensure that pidfds are used whenever possible to more reliable track the container processes.

LXCFS has also seen various code clean ups, as well as an important bug fix that was causing issues during upgrades to LXCFS 4.0 on some systems where the working directly for LXCFS had been removed in the past. Support for temporarily disabling LXCFS virtualisation has been added by sending a SIGUSR2 to the process.