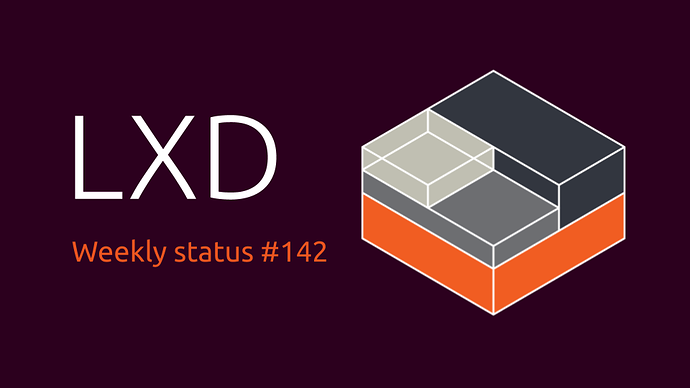 The highlight of the past week was the release of LXD 4.0 LTS!

Also on the LXD front, the resources API has gained the ability to report on USB and PCI devices. It has also been updated to support reporting on per-thread NUMA domains and multiple CPU sockets with multiple dies (and cores per die).

The instance export feature has also been improved to take consistent backups when using BTRFS or ZFS storage drivers. It does this by taking a temporary snapshot of the active volume and uses that as the source of the backup. In addition to this the old behaviour of allowing inconsistent backups to be taken when exporting a running instance from other storage drivers was reinstated, as this was previously allowed before we reworked the export mechanism to use Go’s tar writer for LXD 4.0.

The lxc network list-leases command has been updated to work properly with instances with bridged NIC devices that use the recently added network property.

The VM agent lxd-agent has had two issues fixed. Firstly the systemd units used to start up the lxd-agent have been improved so as not to conflict with cloud-init startup, as this was intermittently causing systemd to skip starting some units. Secondly support for running lxc exec from a remote node to a VM running on a different node is now supported.

On the LXD storage front, pre-mount filesystem UUID regeneration (required when mounting snapshots that use BTRFS of XFS on block drivers such as LVM and Ceph in order to perform instance backups) has been improved so that both LVM and Ceph use the same approaches. An issue that caused snapshotted BTRFS volumes on block devices to not be mountable if the snapshot was taken when the instance was running has also been fixed by rolling back any outstanding BTRFS transactions before performing the UUID regeneration.

Also related to snapshots, an issue that left orphaned snapshot database entries when taking a snapshot failed (such as when the underlying storage driver rejects the snapshot name used) has been fixed. An issue with the recently introduced snapshot usage feature was fixed that was slowing down lxc list. And scheduled snapshots have been added as a criteria for the LXD auto activation feature.

A issue that was preventing deletion of nested BTRFS volumes has been fixed too.

LXC has gained the ability to run the lxc-monitord as a system daemon. In addition to that there has been continued work on improving cgroup configuration compatibility with various compiler and kernel flavours.

Distrobuilder has added the ability to use custom APT repo keys. If the full public key is provided, it just gets imported by apt-key . If the key ID is provided, gpg retrieves the public key before passing it to apt-key. In order for the latter to succeed, gpg needs to be installed early.

The same systemd unit fix for lxd-agent above was added to distrobuilder so that images it builds also have the fix. An issue with /dev/shm missing from the chroot was also fixed. Finally, an issue with the openwrt snapshot release source was fixed.