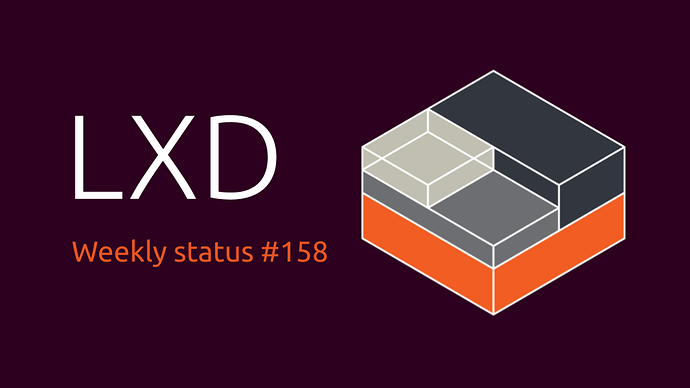 This past week has been focused on networking.

We have added two new network types of macvlan and sriov. These pseudo-networks can be created using:

They can then be used as the argument for the network option for adding macvlan and sriov NIC types. E.g.

This will then add a NIC of the associated network’s type and use the network’s parent property as the parent of the instance’s NIC.

Why is this useful? When in a clustered environment, LXD networks support the concept of per-node configuration keys. Until now the only per-node network key was for bridge network types, called bridge.external_interfaces. However now, with the addition of macvlan and sriov network types, we have added the parent option as a per-node key. This, combined with the ability to specify a network for NICs of the same types, means it now becomes possible to use macvlan and sriov type NICs in a clustered environment where the physical parent network interfaces are named differently on each node.

The container will then use the correct physical parent interface for the node it is actually running on, either enp3s0, enp4s0 or enp5s0.

As part of this work we have also been improving the editing of network configuration in the clustered environment.

However there is a scenario that we are still generating a per-node random MAC address for bridge interfaces, and this is when the bridge.external_interfaces setting is in use with both ipv4.address and ipv6.address set to none. This is because we cannot be sure that the bridge interface on multiple nodes (in a clustered environment) is not connected to the same physical network segment. And using a stable MAC in that scenario would cause conflicts.

Other developments this past week include adding support for using LXD Go packages in other projects when using Go modules and vendoring.

In LXC this past week, there have been improvements to the AppAmor profile to allow read only remount of /proc/sys/kernel/random/boot_id as well as removal of SELinux security_context_t usage as it has been deprecated.

We have also been making changes to the entire LXC tree to hide unnecessary symbols.