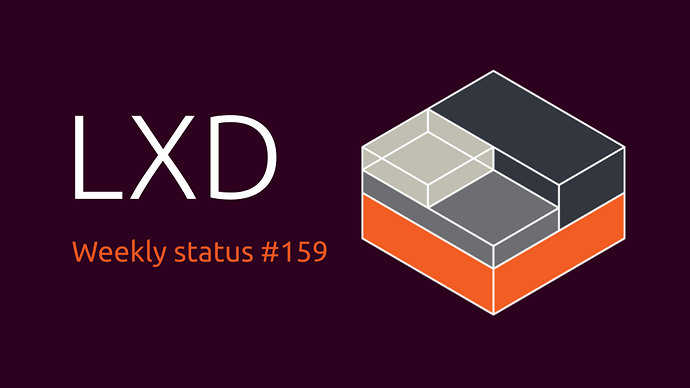 The highlight of the past week was the release of LXD 4.4. Please see the release notes for more information.

On the networking front, in addition to the 4.4 release above, LXD also saw some improvements to the new macvlan and sriov managed network feature to support adding mtu and vlan options to these managed networks.

We continue to make structural changes to the networking subsystem to accommodate the forthcoming OVN feature; these include moving the static DHCP lease allocation logic out from the bridged NIC driver into its own package for use with OVN’s uplink interface, and splitting the veth host-side interface initialisation function into separate functions so that each config setting can be configured on a per-NIC type basis (as OVN only needs to use a subset of them).

An issue with the 4.4 release that prevented starting containers on systems that did not have AppArmor installed has been fixed. This will be cherry-pick into the snap package shortly.

On the clustering front, an issue preventing updating of the recently introduced Failure Domains feature has been fixed. Moving VMs between cluster nodes is now also possible.

We have added support for moving an instance from a standalone node to a clustered node using the existing --target argument.

There have been some optimisations to our seccomp code to use process_vm_readv() rather than pread() in order to read multiple syscall arguments at once.

The documentation has seen an addition to explain how to mount volumes in the snap package’s mount namespace when performing disaster recovery.

On the LXC side, an improvement to our seccomp handling was added to ensure compatibility with the recent Linux 5.8 release. Also an issue preventing building LXC on some platforms due to missing headers was fixed.