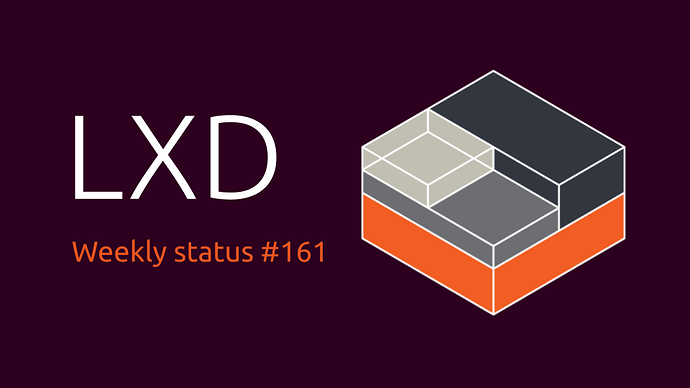 The highlight of the past week were the releases of LXD 4.0.3 LTS and LXD 2.0.12 LTS. Please see the release notes for more information.

On the LXD front, this past week has seen the initial support for OVN networks has been merged along with a fix for the issues introduced recently with the stable MAC change for LXD managed bridge networks that prevented new nodes to join clusters when using networks created pre LXD 4.4. We have now changed our approach to use a ‘stable random’ MAC address for the bridge interface using a predictable seed to allow a stable MAC address for bridge interfaces in a cluster, whilst still allowing multiple standalone nodes on the same external network segment to coexist without MAC conflicts.

A race condition that could cause an LXD crash when stopping a VM has been fixed.

On the storage side, several improvements to the ceph storage driver have been added, including improved clean up when deleting ceph storage pools where the remote volumes have already been removed. An issue that in certain circumstances left orphaned ceph volume snapshots has been fixed.

An issue with the scheduled snapshot feature not actually taking snapshots has been fixed.

On the cluster side, an improvement to prevent issues when upgrading from pre LXD 3.20 has been added to ensure that outstanding raft changes are completed serially.

On the security side, the forkdns process that provides DNS forwarding functionality for cluster nodes has been confined using AppAmor rules and is now run as an unprivileged user. There have also been several improvements to our seccomp handling code to be more resilient and check for more error scenarios. The cgroupv2 AppAmor rules are now disabled on legacy hosts.

On the LXC front, there has been various work on improving the security of terminal allocation and LSM hardening. On the terminal side, the /dev directory is now setup using file descriptors and terminal allocation has been hardened. The LSM layer has been rewritten to avoid calling the apparmor_parser on every shared library invocation. This unblocks using AppArmor profiles for most of our subcommands,

Distrobuilder had a small fix to get the Apertis build tests working again by removing older releases.