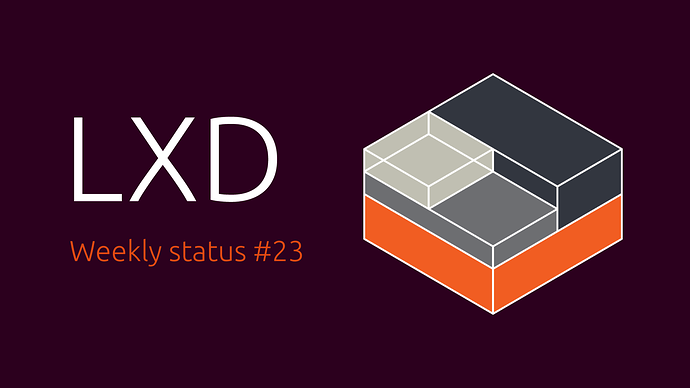 The main focus this past week has been on merging a pretty large refactoring branch on top of LXD. This moves a lot of code around to make it more testable and easier to plug in a new database implementation in preparation for some clustering features.

We’ve done a few minor improvements like adding a new “lxc operation” command, letting users peak into what LXD is currently doing in the background. And have been expanding our static analysis tests to catch typos and a number of potential issues (unchecked variables).

We’re also excited to see a number of students from the University of Texas get involved in LXC and LXD. We’ve already included a small change to LXC coming from them and expect to see more contributions coming from them very soon!

On the LXC front, a bunch of work has been done to improve the console handling, supporting an in-memory ringbuffer to show the console backlog, new API functions to query and reset that backlog and a number of cleanup around the detach key binding and associated messages.

And that’s before the usual set of bugfixes and stable release work for all projects!

This week, we’re going to be releasing LXD 2.20 and do quite a bit of work on the LXD stable branch following that big refactoring we did this past week.