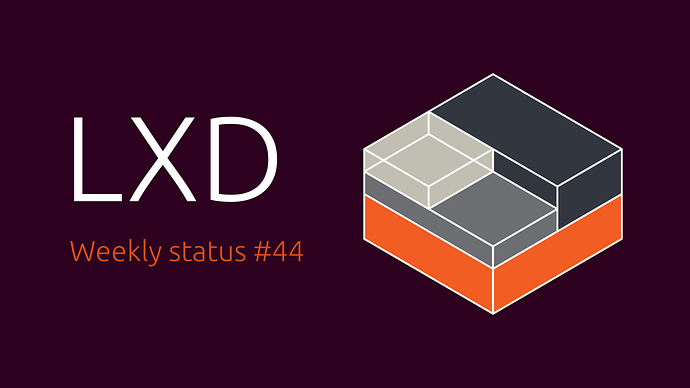 Another week of bugfixes for us as more and more people update to the 3.0 releases!

Quite a bit of work went into improving the handling of the two database in LXD 3.0, making it easier for us to debug issues and provide fixes to our users when something goes wrong. Work is also continuing on the new backup/restore API for LXD with it hopefully landing later this week.

We’re also excited to see LXD debuts on the Chromebooks through the new Crostini feature. This also led to a minor change to LXD to allow restricting users to unprivileged containers as was needed for those users.

Now that LXD 3.0 is mostly behind us, we’re focusing on the roadmap for the next 6 months and early preparation for LXD 3.1 to be released in a couple of weeks.

I’m not understanding the “Snap” portions of this update.

Would it be possible to get a why, where, how etc please?

It’s updates to the snap package for LXD. It’s a package format which is available on several Linux distributions. The LXD team currently directly maintains the packaging for LXD as a native Ubuntu package and as a Snap package. Eventually we’ll switch to only maintaining the latter.

Those entries in our weekly status updates list changes we’ve done to the packaging, sometimes making new features available or as was done this week, just fixing bugs.

Does this mean that you are planning to no longer offer a LXD from source
packages?

No, we’ll always release source packages with our stable releases. The Ubuntu and Snap packages are binary packages.