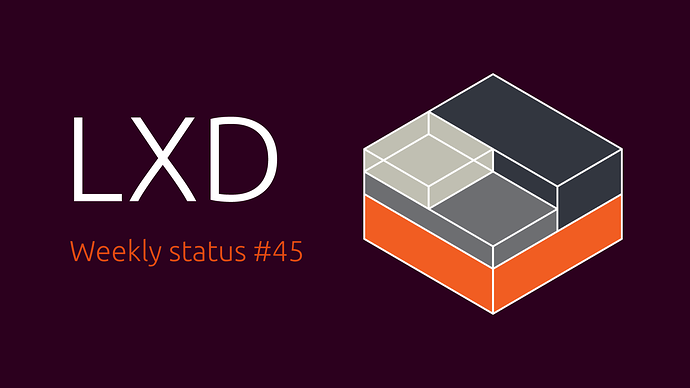 Our focus this past week has very much been bugfixing, trying to be very reactive on all bug reports around LXD 3.0 and then pushing those fixes to our users through the LXD snap.

This past week also saw the release of Ubuntu 18.04 LTS which ships with LXD 3.0 pre-installed in its server image!

We’ve also finally started migrating some of our images over to distrobuilder. The main integration work in our signing and publishing infrastructure has now been done and the Debian images are now generated using distrobuilder on Jenkins and published through the usual set of servers. We expect more distributions to follow soon!

On the feature development side of things, most of our efforts are going into the backup/restore feature which has been updated a bit after an initial review and that will ship with LXD 3.1.

Above the last item on the list of items for lxd.
Please - - - what does this mean?

The Ubuntu Fan is a dynamic, stateless overlay network which lets you have a bridge per host on your network and have routes automatically generated between the nodes so that they can reach each another.

Thank you for your response! So how is ‘fan’ different from lxdbr0?