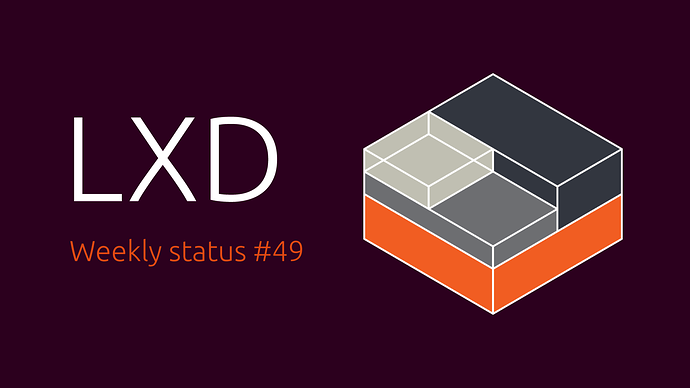 The team was out on Monday due to various regional holidays.
The rest of the week was then spent working on a few new LXD features like UDP and Unix socket proxying, support for nested LXD retrieving images from its host and the lxc-to-lxd rewrite.

We also kept tracking down a number of issues and fixed quite a few of them, especially related to clustering corner cases.

All our branches are now ready for the upcoming 3.0.1 bugfix release which if all testing passes should be out by the end of the week.

Other than that, quite a bit of effort also went into the LXD snap, refreshing all packaging branches, adding a few new features like translation support and a new lxd.buginfo command as well as tracking down a number of reported issues there too.

On the LXCFS side, we merged support for loadavg virtualization which should make it possible for containers to report a much more reliable load value.

And lastly on the LXC side of things, a lot of care went into tracking down a number of Seccomp issues, cleaning up the code quite a bit in the process as well as fixing some issues related to multi-threaded use of the liblxc library.