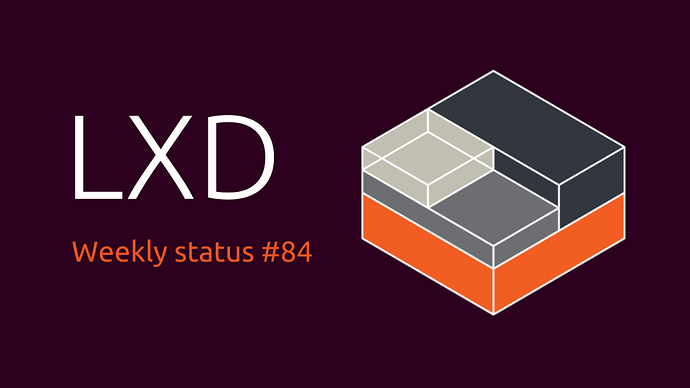 This week we released LXD 3.10 which should now be rolling out to users.

This release got delayed a bit and happened at the end of the week so we could fit in a few last minute bugfixes and minor improvements.

On the LXC side, we’ve kept working on improving code quality and hardening.
alloca() was eradicated from the code base, we’ve started making use of cleanup macros, tweaked our compiler flags some more and added some initial coccinelle scripts.

And lastly, ArchLinux has now been moved over to distrobuilder for image building and we’re making good progress towards moving Gentoo and Sabayon next.
As always, switching to distrobuilder comes with more images being made available for more architectures.

We also dealt with CVE-2019-5736 in liblxc and wrote about its affect on LXD users. The short version of this is that users of unprivileged containers (default) are perfectly safe, users of privileged containers may be at risk in some specific environments. This does not include snap users which are all safe thanks to the snap package being read-only.

This issue has been fixed in all maintained branches of LXC (2.0, 3.0 and master).
In line with our security policy, this issue isn’t treated as critical for LXC due to only affecting privileged containers which are already deemed to not be root safe.
This means that we will not be issuing emergency security releases for this and the workaround for this issue will be included in our next regular bugfix releases.