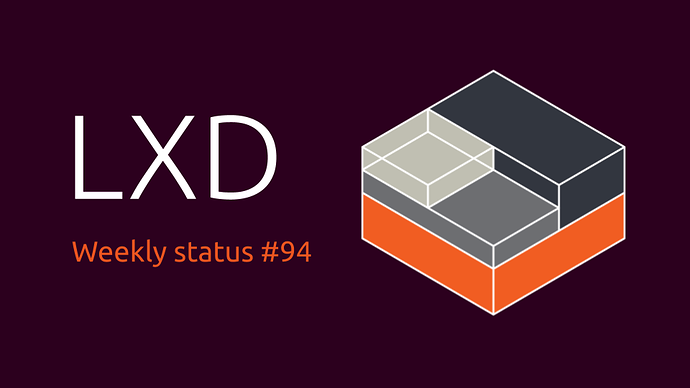 Releasing this a day late due to the long Easter weekend which had all of us mostly away for the past 4 days.

This past week we welcomed @tomp on the LXD team and @stgraber spent a few days in London to get him up to speed and get his first LXD contributions merged.

It was also the release week of Ubuntu 19.04 which ships with LXD 3.12 and a 5.0 kernel which includes various features and improvements we’ve been working on, including shiftfs (currently soft-disabled in LXD), binderfs and improvements to network information retrieval.

Highlights for this week are a number of improvements to network devices in LXD, including better error handling for limits and support for adding routes directly to containers rather than the parent bridge.

On the LXC side, a number of small bugfixes got merged this past week, including fixing support for 32bit SPARC.

We’ve also kept working on the LXD RBAC branch, the internal storage refactoring and started working on syscall interception in liblxc ahead of adding support for it in LXD.

On the distrobuilder side, the focus has mostly been on improving reliability of our daily builds to reduce the number of retries needed to get all images building.