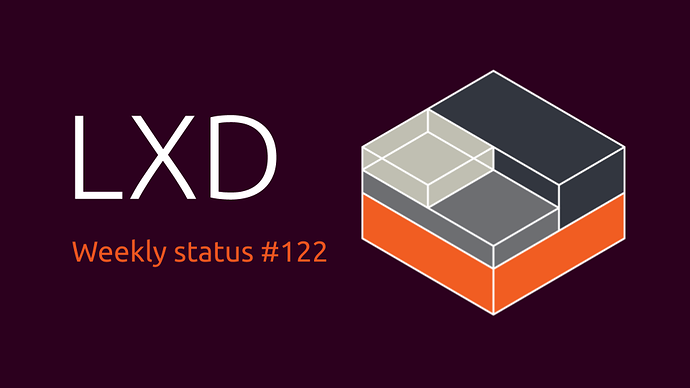 This past week has seen more of the storage re-structure work landing, including a new internal storage interface that provides a blueprint of how each storage driver should interact with LXD.

The new storage interface includes changes to volume migration too. Previously the websocket connection used for performing the file transfer was passed directly into the driver. Now the websocket connection is wrapped to appear as a standard io.ReadWriteCloser interface. This allows for different implementations of the migration transport layer to be used with the storage layer and means the new storage drivers will be transport agnostic. The benefits of this are: custom volume and instance volume migrations will now share the same code base (which means custom volume migrations will be able to benefit from some driver’s more efficient transfer mechanisms the same way container volumes do today) and that local volume copy/move operations between storage pools will now use the same migration logic (albeit it not using websocket transport) which has fixed some bugs that stopped volumes being transferred properly between some storage pools.

Also this week support was added for using the squashfs compression format when generating image exports and backups.

An issue with recent ebtables filtering has also been fixed, and a regression with MAAS registration occurring before a container NIC’s MAC addresses had been generated has been fixed too.

In LXC a return value bug in the terminal code was fixed and additional tests for were added for lxc-attach and lxc-execute to detect regressions on exit code returned from those commands.