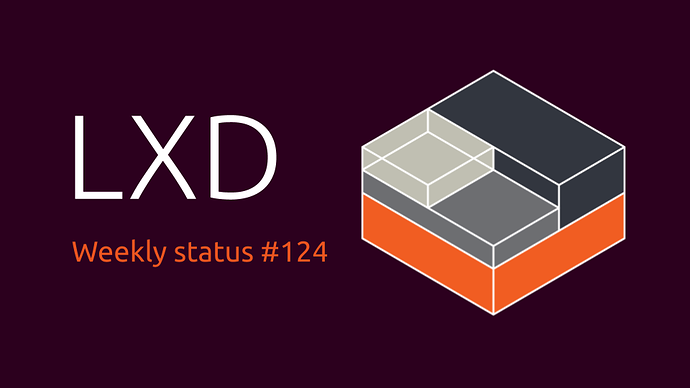 The focus for LXD this passed week has been on continuing our initial virtual machine support.

There are new virtual machine specific API routes (at /1.0/virtual-machines) that will operate only on VM type instances.

A lot of development has continued on our new lxd-agent program that will run inside a VM to provide functionality that has previously been available to the lxc CLI for containers (such as file pull/push, console and exec). The agent itself is now made available to the VM through a 9p file share, and our forthcoming VM images will include init modifications to ensure that the agent is running on boot.

These init modifications will use an identifier file that has been added to the VM’s started through LXD to ensure the agent only starts if running inside LXD.

In the container realm, the router veth mode added to LXC back in LXC 3.2.1 has now also been added to LXD. This takes the form of a new NIC type called routed. This new NIC type provides a way for containers to be statically assigned external IPs from the host’s network (using static routes and proxy ARP/NDP) without using a bridge, IPVLAN or MACVLAN. It can also be useful when the host is connected to multiple networks and/or uses routing protocols to publish IP information about containers.

Support has also been added to allow interception and redirection of mount syscalls for filesystems and redirect them to their corresponding fuse implementation.

This is available through the new container config key security.syscalls.intercept.mount.fuse=<fstype>=<fuse-binary>.

On the distrobuilder front there have been improvements made to the OpenWRT build process and further documentation clean ups.