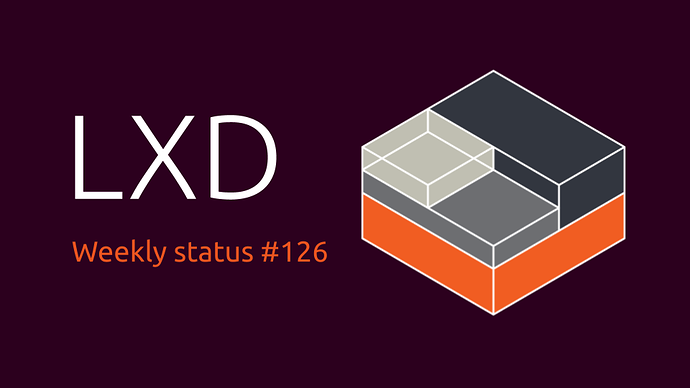 This past week’s primary focus has been on the continued storage layer migration and on adding features for the initial virtual machine functionality.

On the VM front the plumbing has been added to make the lxc list command quicker when VMs are starting and the lxd-agent has not started yet, as previously this has caused the command to freeze for several seconds. This has been achieved by moving the state check to a background go routine and using Qemu’s management API to access a shared buffer that the lxd-agent will use to write its status into which will reduce the need to try and connect to VMs over vsock that we know don’t have an agent running yet.

Hugepages support has also been added to VM, as well as a virtual GPU and freeze/unfreeze features.

Also related to VM support being added, the documentation is being updated to change references of “container” to “instance” to reflect the fact that LXD can now support multiple instance types. Further documentation changes will occur in the future to indicate which features work with specific instance types.

On the new storage layer front work has continued into linking the new package into each part of LXD that needs it (this week it has been backup & restore, and migration) and implementing the functionality required for the dir backend.

The database change groundwork was also added to accommodate multi-architecture clusters in the future.