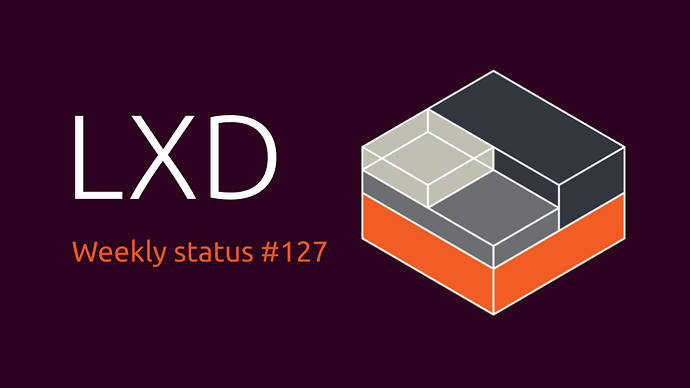 This past week we have continued our focus on preparing for the LXD 3.19 release by continuing work on the virtual machine feature and the storage layer refactor to support it.

On the VM front we have now improved the background state monitor that was added last week to detect when a VM is shutdown or rebooted and take the appropriate action. This has allowed us to add power state tracking so that if a VM is running when the host is shutdown, LXD will be able to start it backup again automatically once the host has rebooted.

Internally the VM implementation has now been moved to its own instance/qemu package as part of our ongoing effort to split the LXD base into more modular packages. We have also removed the default GPU device that was briefly added to the VM instance, in preference for an optional GPU device that will be added in the future using LXD’s normal device management API.

We have also had a feature contributed to LXD that allows one to specify the default profile(s) used when creating an instance from a specific image. This can be achieved by editing the profiles property on an image using the lxc image edit <fingerprint> command.

Also related to image management, the ARCH column in the lxc image list output has been renamed to ARCHITECTURE.

Several small improvements to LXD’s shiftfs integration have been added, firstly LXD will now detect shiftfs support in the kernel, even if it is built-in rather than using a kernel module. Secondly, an environment variable has been added LXD_SHIFTFS_DISABLE that will allow LXD to start and disable shiftfs support even if the kernel does support it. This is useful for when you need to use the non-shiftfs UID/GID shifting approach.

A fix to LXD’s forkdns was added due to a change in the upstream DNS package we use which broke DNS forwarding.

On the LXC front a change to some licensing headers was made which fixes a number of file that are part of liblxc but were improperly licensed under GPLv2+, in most cases due to bad copy/paste of licensing headers. This was treated as re-licensing so all affected files were analysed to get a list of current potential copyright holders and all of them were contacted to confirm the change. LXC was also switched over to use SPDX format licensing headers.

There was also a continued focus on our cgroupv2 support.

In addition several bugs were fixed related to config handling, including a memory leak and an issue passing mount options.