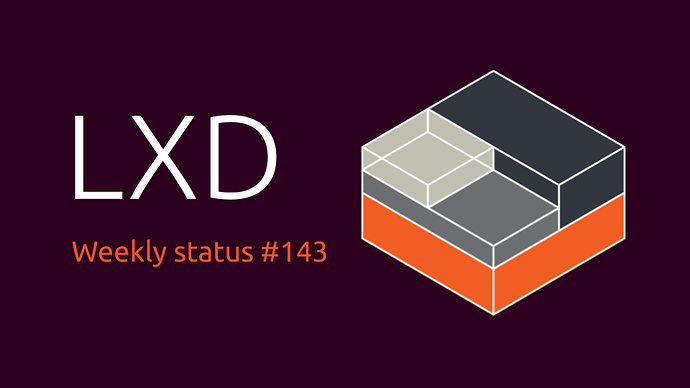 The highlight of last week was the release of LXCFS 4.0.2 LTS.

On the LXD front the past week has been focused on improvements and bug fixes.

LXD Storage:
We now create any missing snapshot mount directories before attempting to mount. Whilst the new storage layer creates these directories at snapshot create time, the old storage layer did not and so this caused issues when trying to mount old snapshots, such as when doing a restore or backup operation.

For LVM pools using a loop file, we now activate all of the volumes in the pool when mounting the pool. We previously did this just for normal non-loop volume groups, however this caused issues when using LVM loop pools inside the SNAP package.

We have improved our snapshot usage feature, making the reported values more consistent across the different storage drivers.

For directory pools where project quotas were supported, new volumes were having a default quota of 10GB enforced. This has now been removed as non-block storage drivers do not have any default quota.

For ZFS pools, we now ignore any .zfs directories and consider the directory empty still. This prevents failed starts when the snapdir=visible setting is enabled.

An issue with snapshot migration when upgrading LXD has been fixed.

LXD Cluster:
A recovery command to remove leftover raft node has been added.

Support for Intel i350 cards and newer versions of the ip tool have been added when using SR-IOV virtual functions.

We now push any custom MTU settings from managed networks in the DHCP response to the instances.

The Managed field in the NetworksPost structure has been removed, as this field was never modifiable from the API.

We have added documentation for getting LXD to work with default firewalld configuration in Fedora.

LXD VM:
An issue preventing migration of VMs with snapshots when using the ZFS storage driver has been fixed. And improvements to the cleanup procedure when a migration fails have been added to prevent lock ups.

LXC:
On the LXC front and issue that prevented IPVLAN Layer 2 mode working has been fixed. In addition to that there was an improvement added to lxc-user-nic to allow it to run when the group name was not found. There was also several cgroup improvements added to better support cgroupv2 systems.

LXCFS:
An improvement to the way LXCFS reads /proc/meminfo has been added to avoid reading the wrong value when two values have the same prefix.

snap:
The LXD snap has been refreshed quite a few times with cherry-picked bugfixes from LXC, LXCFS and LXD as well as seen updates to fix some longstanding issues including lxd.migrate hanging, cleanup of the lxcfs mount namespace, better process tracking as well as adding a number of utilities.