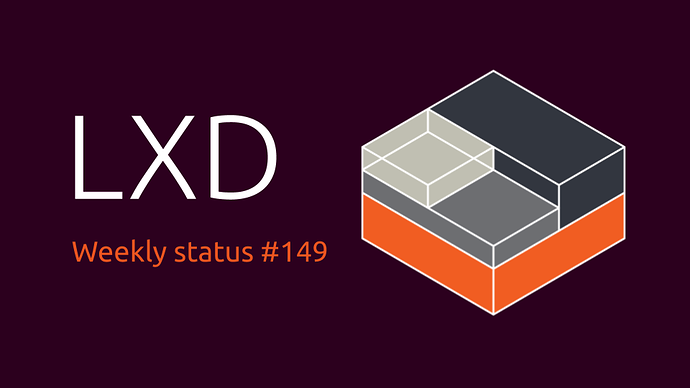 This past week has been primarily a bug fix and improvement week, however there are some new features as well.

Firstly we have added the ability to output the memory and disk usage columns to the output of lxc list. E.g. lxc ls -c nmD.

We have also added time skew detection (resulting in a warning in the logs) when using clustering to better detect if the system times on each cluster node have diverged from one and other. If this happens it causes problems with the raft replication used by dqlite, so it is important to keep all of the nodes in time sync using NTP. There have also been several pull requests merged that continue to improve the resilience of the clustering feature.

We have also added support for the dns.search property on a managed LXD networks so that you can instruct dnsmasq to push additional DNS search settings via DHCP to instances.

We have also rolled out a patch to the LVM storage driver that enables the skipactivation flag on LXD managed volumes. This makes the LVM volumes not appear in /dev until they are ‘activated’ by LXD when needed. This behaviour brings the LVM driver inline with similar behaviour of ZFS and Ceph drivers. There was an issue with the patch not taking into account custom LVM volume group names which has also been fixed and will be pushed to the Snap stable branch shortly.

Also on the storage side, the recent addition of support for BTRFS subvolumes in optimized backups introduced an intermittent restoration issue on our test systems which has been fixed.

On the networking side, an issue preventing using proxy devices in NAT mode with IPv6 when using nftables has been fixed.

On the VM side, work that was started last week to make the lxd-agent statically compiled (in order to allow it to run inside Alpine VMs) has been completed. In addition to that an issue preventing unified image unpack for VM images when running on dir or btrfs storage pools has been fixed. We have also added support for the s390x architecture.

On the LXC front, a regression that meant that interface names inside the container were random when using macvlan without the .name property defined has been fixed.

Pongo2 support for templates was added. And a regression to the way checksums for download packages were calculated has been fixed.

Hi, is the listing feature out or not yet.
lxc ls -c nmD Error: Unknown column shorthand char 'm' in 'nmD'
Thanks.

So you will likely need to use the edge version (in snap for example) to get that change.
Alternative is to wait, until it gets included in stable versions.

Correct, we cherry-pick bugfixes every few days into the stable channel but this qualifies as a feature and so will only be made available in stable when we release and bump to 4.2.