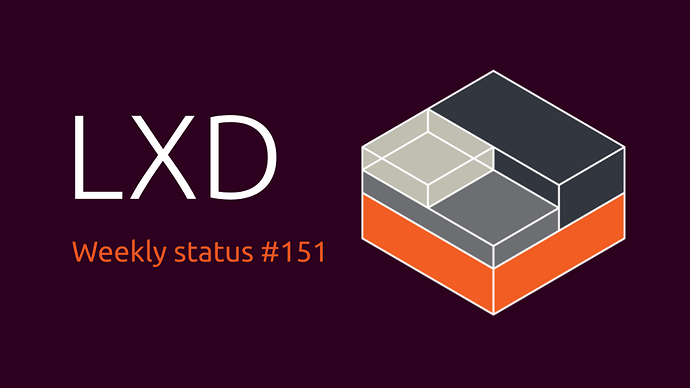 The highlight of the past week was the release of LXD 4.2 which is the second feature release since our 4.0 LTS series.

On the LXD side, this past week has seen the addition of a new feature to allow LXD to make use of the VLAN filtering options available in both Linux native bridges and Openvswitch bridges.

You can also use a special value of “none” with the vlan option, which will prevent any untagged frames from being transmitted.

We have also added bridge and bond information to the /1.0/networks/NAME/state route in the API.

An issue with Openvswitch ports not being cleanly removed from an Openvswitch bridge has also been fixed. And we have fixed an issue with veth device cleanup not occurring when a container fails to start properly.

On the storage front, the mount options parsing used when mounting LVM and Ceph volumes have been unified, and in doing so an issue that prevented the volume’s block.mount_options setting from being applied for LVM volumes has been fixed.

On the VM front, we have added a GPU and spice socket to the Qemu config as part of laying the groundwork for supporting display output.

Improvements were added to LXCFS to better emulate /proc/stat when using various CPU profiles.
There were also several memory leaks fixed and a general code cleanup.