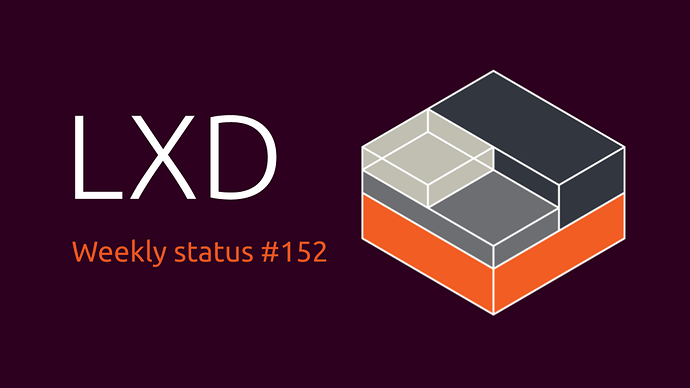 This past week’s focus has been on our virtual machine PCIe layout, ultimately resulting in adding support for external GPU passthrough and a built in virtualised GPU to aid with our plans to add video output using SPICE.

What was initially a rather adhoc layout has now been formalised. With our built-in low-bandwidth devices being added to the 1st PCIe root port as virtual functions, and the SCSI disks, 9p shares and built-in GPUs being added as 3 more separate root ports. This means that the first NIC device added to a VM always takes the 5th PCIe root port and so will consistently be named enp5s0 on guest OSes that support this naming scheme (which VMs created using our existing LXD VM images expect).

The take away from this is that you can now pass-through an external GPU (and associated devices, such as audio controllers) into a VM using the familiar syntax used for GPU passthrough with containers:

This results in a PCI layout inside the VM similar to:

Note: Unlike passing GPU devices with containers, with VMs the GPU device is unbound from the host, so it must not be in use when the VM is started (or you may lose access to your display).

In addition to this an issue with deleting and restoring containers that contained pipe files when using ext4 project quotas has been fixed.

An issue that prevented starting all instances when using the --all flag with a remote node has also been fixed.

Continuing from last week’s addition of support for VLAN filtering on native and OVS bridges in LXD, the feature has now also been added to LXC.

LXCFS has seen an issue with invalid SWAP values being emulated that was introduced recently with other performance improvements fixed. In addition to that there has also been continued work to better emulate the cpu view.

An issue that prevented xattrs being preserved in generated imaged has now been fixed.