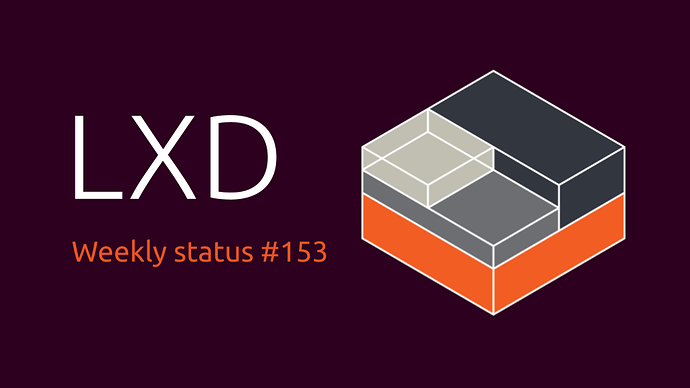 The highlight of the past week was the release of LXCFS 4.0.4 which is the fourth bugfix release for LXCFS 4.0 which is supported until June 2025.

In addition to this the LXC and LXD codebases were updated to remove the needless use of terms like master/slave in favor of parent/pts/ptmx when not part of a publicly exposed API. There are some more cases that we’re planning on addressing but those may need backward compatibility logic to properly handle. We’re also keeping an eye on our upstream dependencies for their own effort in this area and hope to be able to propagate such changes down the chain.

The GPU passthrough feature added 2 weeks ago has seen some improvements in the past week. We are now detecting whether the GPU on the host supports VGA mode on x86_64 systems, and if so we pass that functionality through into the VM guest. For other architectures or if the host device does not have VGA mode, we just pass through the PCI device without it.

There have also been some improvements to the 9p directory passthrough feature for VMs. In order to support automatic mounting of the directories using the lxd-agent on more distros we are now explicitly passing the trans=virtio mount argument. Additionally an issue that meant that relatively mount paths were not working for 9p shares has been fixed.

When starting (or restarting) instances you can now jump directly into the console using the new --console argument, which can be useful when trying to get into the BIOS on VMs or observing early boot messages.

LXD Projects now support clearing config keys, and the default project has the storage.volumes feature added to it.

An intermittent race condition in the cluster heartbeat code was fixed which was detected in our test system.

The LXD API has seen some clean up with work on the UsedBy key logic to ensure that the output of the resources using another resource is correct and consistent.

An improvement to the resources API to be more flexible when detecting PCI devices has been added to better support some ARM platforms.

A check has been added to the lxc query command to ensure the path supplied is an absolute path (i.e it starts with a /).

An issue with importing GPG keys when using non-English locales has been fixed.
The OpenSUSE x86 source tarball downloads and the CentOS CHECKSUM source file name has been fixed.