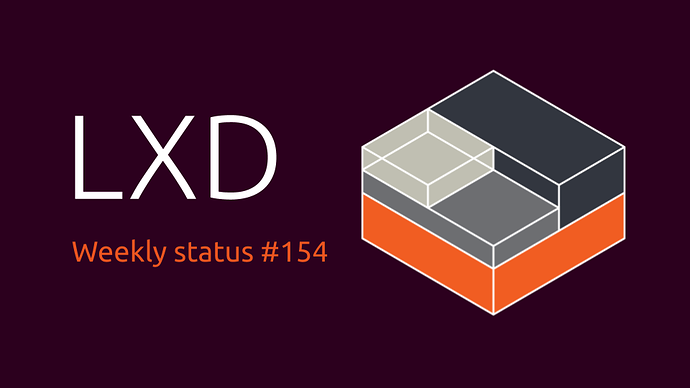 Those includes accumulated bugfixes for the past few months of development.

Most of the focus this past week has been on improving VM functionality. The highlight of which was adding support for custom block volumes for VMs.

These can now be created as so:

Also on the VM front, we have added a udev rule to start the lxd-agent inside the VM guest, should the systemd unit fail to start due to a race depending on the qemu device that indicates an LXD VM guest. This fixes lxd-agent start problems on some distros, such as Debian.

An issue with cloud-init inside VMs has been fixed to ensure custom cloud-init config is applied.

Although not strictly related to VMs, it was impacting them the most, an improvement has been added to use the backups volume for temporary backing unpacking (if specified) rather than potentially filling up /tmp and failing for larger instance backups.

We now also support passing arguments to the backup and publish compressor executable rather than just its name.

This past week has seen initial support for time namespace added to LXC. This allows you to specify an offset for the boot time and monotonic clocks inside a container.

Several fixes have also been added, including a fix for the lxc-net script to support properly calculating the broadcast address of the bridge. Fixes for log flooding due to missing command and a non-blocking stop issue have also been fixed.

Further improvements to swap accounting have been added this past week to handle more edge case conditions after the recent re-work.

The agent race condition mentioned in the LXD section has also been applied to the images we build. Several issues were fixed for Oracle and openSUSE images as well.