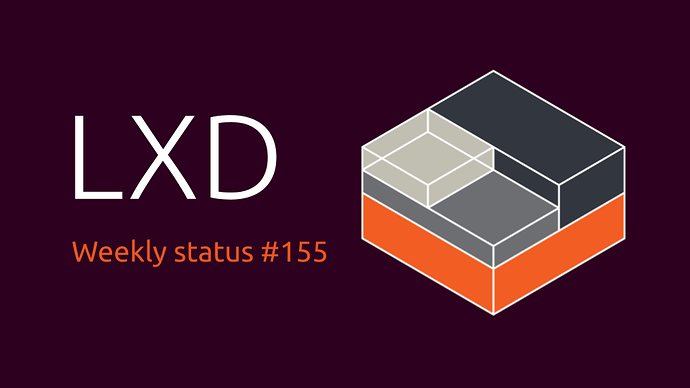 The highlight of the past week was the release of LXD 4.3 and LXCFS 4.0.4. Please see the release notes for more information.

Virtual machines have gained support for the /dev/lxd device this past week. We also improved the way that memory is pinned to CPU in NUMA environments. Also memory related, we now detect and passthrough a hugetlbfs instance mount point if available.

VMs now allow the same custom volume to be concurrently used in multiple VMs (however this requires the filesystem being used to support concurrent use). Ephemeral VM support was also added.

On the clustering side, we have now added support for failure domains. This allows one to specify which failure domain a voting member belongs to, so that when a node is lost, a replacement node will be chosen from the same failure domain (if possible). This reduces the chance that losing a physical failure domain (such as power circuit, availability zone or VM host) can result in the database losing quorum and going offline.

Project names are now better validated to avoid situations where a project name (containing spaces) can cause issues with some underlying subsystems.

We now filter selinux xattr when rsyncing container (if supported by rsync) to avoid issues when copying containers when running selinux on the host.

The whitelist & blacklist terminology for the security.syscalls.* settings have been replaced with “allow” and “deny” equivalent settings.

On the LXC side, support for cloning directly into a cgroup has been added.

A fix has been added to attach to set PR_SET_NO_NEW_PRIVS after the LSM label has been added, to make consistent with normal container startup.

Terminology updates to change whitelist & blacklist settings to allowlist and denylist have been added, whilst maintaining support for the existing settings.

The lxc-download template has also some improvements with regards to gpg response handling.

An issue attaching BPF programs in a pure cgroupv2 environment has been fixed.

The Ubuntu example has been updated to use Focal.