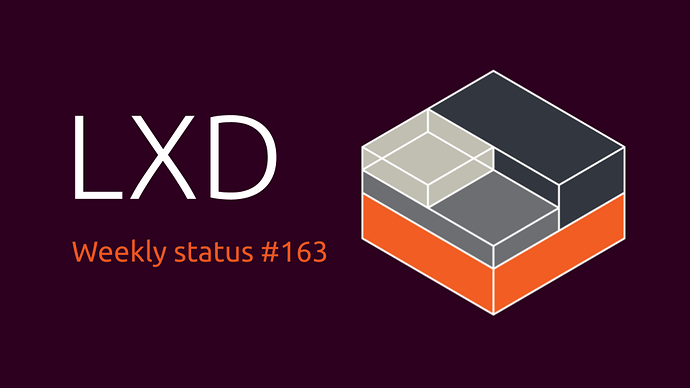 The highlight of the past week was the release of LXD 4.5. Please see the release notes for more information.

In addition to the LXD 4.5 release above, there have also been the usual set of improvements and fixes, including adding AppArmor confinement of the forkproxy process (which is started when using the proxy device in non-NAT mode) and we now more intelligently handle initiating automatic scheduled volume snaphots for remote storage pools when clustered. Previously this was done repeatedly on every node in the cluster. However now we pick a single node in the cluster to initiate the snapshot. This is picked randomly (to distribute the load across the cluster), but in a stable fashion so that the same node always starts the snapshot for the same volume (unless that node goes away). This ensures that we only take a single snapshot without having to coordinate between the nodes.

There have been several changes to the cluster node join process; we have removed the legacy cluster join API method (i.e not providing ServerAddress field), and there is now a new internal LXD user agent used to indicate to the local node that the actions being requested are part of a pre-cluster-join process. This allows adding cluster nodes when using OVN networks (which need to avoid setting up the logical network again when creating the node-local network).

Several issues have been also been fixed around ZFS volume migration, including ensuring that transferred snapshot volumes are always created on the same storage pool as the parent volume. This fixes an issue when transferring snapshots when specifying the target pool override option.