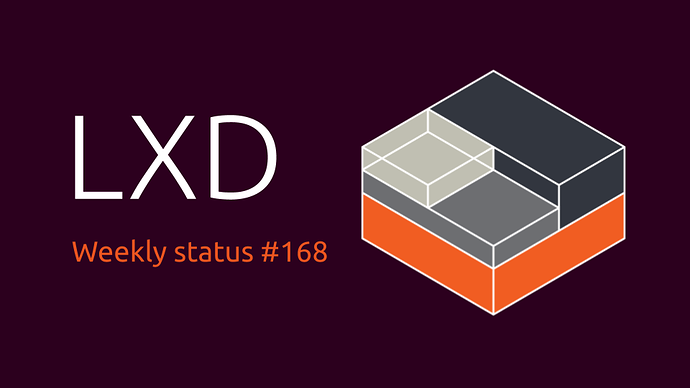 Weekly Update Templates960×540 48 KB
Weekly status for the week of the 28th of September to the 4th of October.

This past week has seen several new features added to LXD.

On the networking front, we have added support for stateful DHCPv6 for OVN networks. This can be enabled using the usual ipv6.dhcp.stateful config key.

We have also improved the output of fallback instance IP address list when LXD cannot contact the lxd-agent process inside a VM. In these scenarios we had previously looked at the DHCPv4 leases and the IPv6 neighbour cache on the parent interface. We now also support inspecting the OVN northbound database for IP addresses associated with a virtual port, and for bridged NICs we use the IP neighbour cache for both IPv4 and IPv6 address. For both ovn and bridged NICs we now also ‘guess’ the IPv6 address as the EUI64 address derived from the NIC’s MAC addresses if ipv6.dhcp.stateful is disabled on the parent network. This should improve the accuracy of the IP address output in lxc ls and lxc info when running VMs without an lxd-agent (such as Windows).

Instance and custom volume backups gained the ability to import a backup file as a different instance name or custom volume. We have added an optional argument to specify this to the lxd import and lxd storage volume import commands.

Also on the storage front, storage pools have gained a rsync.compression setting to which allows rsync compression to be disabled during volume transfers. This can significantly speed up transfers when the bottleneck is CPU rather than bandwidth. Rsync compression remains enabled by default.

Virtual machines have gained support for live memory shrinking and growth back to boot time size using the balloon device inside the VM guest. This can be controlled using the lxc set <instance> limits.memory=<size> command.

In some circumstances the VM’s qemu process can hang in such a way that LXD had previously reported the VM as stopped, but it could not be started again because it was still partially running. This issue is now detected, and will show the VM in an error state.

Finally, there have been several AppAmor fixes that were preventing dnsmasq operation in some environments, and a bug that allowed empty passwords to be set during cluster setup (and subsequently prevented any nodes from joining the cluster) has now been fixed.