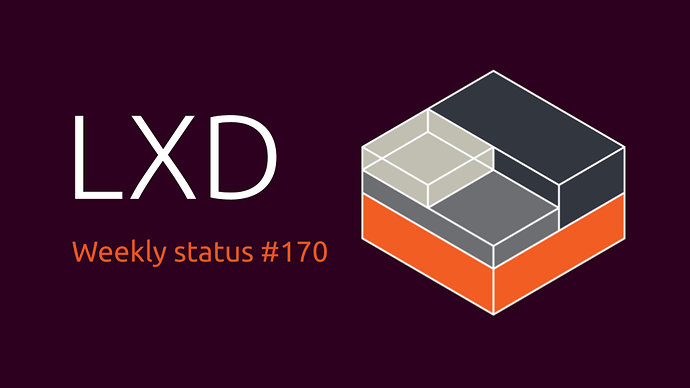 The highlight of the past week was the release of LXD 4.7.
Please see the release notes for more information.

In addition to the new features mentioned in the 4.7 release announcement above, there were also other improvements and fixes.

When removing an LVM storage pool that was created using lvm.vg.force_reuse=true we no longer try and remove the thin pool (if exists) and volume group, even if both are empty.

OVN networking has gained support for using an externally routed subnet as the main subnet address for the virtual network (in addition to the ability to route external subnets into an OVN network that was added in LXD 4.7). This is achieved by disabling NAT and then setting the network’s ipv4.address and/or ipv6.address to a subnet provided by the uplink’s routes.

Finally, add an ovn NIC to the network:

An issue that prevented DNS AAAA records being created for OVN NICs when specifying a static stateful ipv4.address but leaving the IPv6 address as using EU64 has been fixed. This works around a limitation in OVN that doesn’t allow mixed static and dynamic address families to be used. Instead we specify the OVN NIC’s IPv6 address statically using EUI64 when an IPv4 address is statically defined.

An inconsistency between the docs and the code has been fixed for bridge networking in fan mode. The docs specified that if ipv4.nat was unspecified, that it would default to false, however when using fan mode this would default to true. This has now been fixed to match the docs.

A regression with a recent change to the seccomp mount emulation has been fixed.

There have been several improvements to the seccomp feature in LXC. Firstly a patch was added to check if syscall is supported on a compatible architecture. There was also several bug fixes around the seccomp default notification sending, and a fix that was preventing building on powerpc.