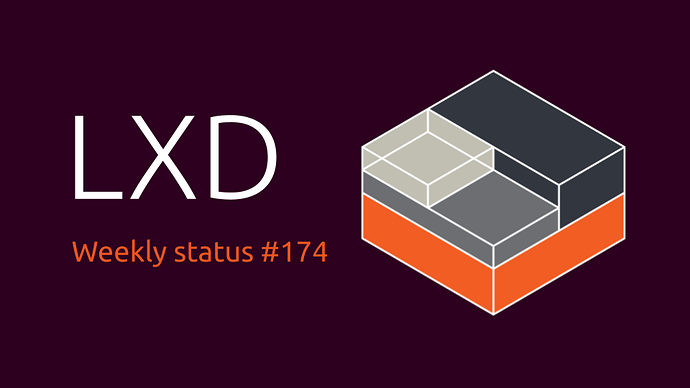 The vast majority of the past week was focused on fixing storage bugs and improving our cgroupv2 support in LXD.

The storage changes can be broadly broken down into these areas:

Related to that last point we have now introduced the volatile.uuid config key for all instance types (containers and VMs). This replaces the volatile.vm.uuid key for VMs (a patch will copy the existing value into the new key so it doesn’t change). It is generated automatically on first instance start and persisted for the lifetime of the instance. It can be used as a persistent reference to the instance that will survive recovery via lxd import that causes the instance’s ID to change.

The mount referencing counting feature was added primarily to allow VM snapshots on ZFS to be used as the source for copying to a new instance. This was not working before because ZFS requires the parent volume to be activated before its snapshots can have their block devices activated. This meant that in order to mount the snapshot to copy it we need to also mount the parent. Unfortunately the existing storage layer could not account for tracking ongoing operations across multiple volumes, and attempting to unmount the parent volume when unmounting the snapshot would have caused problems. However this new feature also fixes a class of problems related to long running file transfer operations when stopping/starting a container during a file transfer operation.

As part of improving our cgroup abstraction and automated testing work, several bugs in that area were fixed as well.

The lxc command also gained two new features. Firstly, two new columns have been added to the lxc list command; these are M Memory usage (%) and u CPU usage (in seconds).

Secondly, the lxc snapshot command gained a -reuse flag allowing for an existing snapshot to be deleted and re-created using a single command.

A new copy generator was added to distrobuilder to allow files from the host to be copied into the container. See https://github.com/lxc/distrobuilder/blob/master/doc/generators.md#copy for more information.