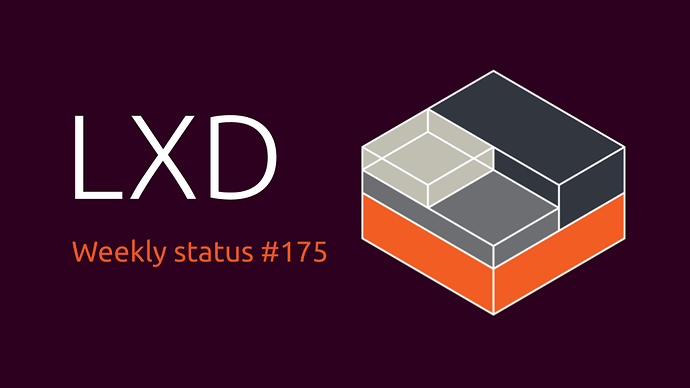 This past week has continued our focus on fixing storage related bugs, however LXD also gained support for GPU passthrough for virtual machines.

LXD gained support for GPU passthrough for VMs (both physical and mediated device modes via a new device sub-type which can be specified using the gputype config key). Please see https://linuxcontainers.org/lxd/docs/master/instances#type-gpu for more info.

Related to mediated GPU devices, additional information about available devices has been added to the lxc info command.

Virtual machine instances now always display their disk usage when running lxc info <instance> even if they are stopped.

On the networking side, continuing on from last week’s addition of the volatile.uuid instance key, which stores a persistent unique UUID for each instance that will remain the same even after an lxd import, we are now using this UUID to generate the OVN logical switch port names rather than using the instance’s DB ID. This way even an instance with an OVN NIC is imported using lxd import while running (causing the DB ID to change) when the instance is stopped the OVN logical switch port will still be cleanly removed from the OVN Northbound database.

We have also fixed an issue that was reported when using SR-IOV NIC devices with the Broadcom bnx2x driver. This was because the driver apparently does not allow resetting the virtual function’s assigned MAC address to zero (which some SR-IOV drivers do require before the VF can have MAC filtering disabled).

On the storage side we continue our focus on fixing storage bugs, this past week the following issues have been fixed:

An issue that prevented using lxc-wait on a yet to be running container has now been fixed.

Also an issue preventing container start on Linux 5.10.0-rc3 due to being unable to read /proc/self/mountinfo using sendfile has been fixed.

An issue preventing lxd-agent start in OpenRC based distros has been fixed.