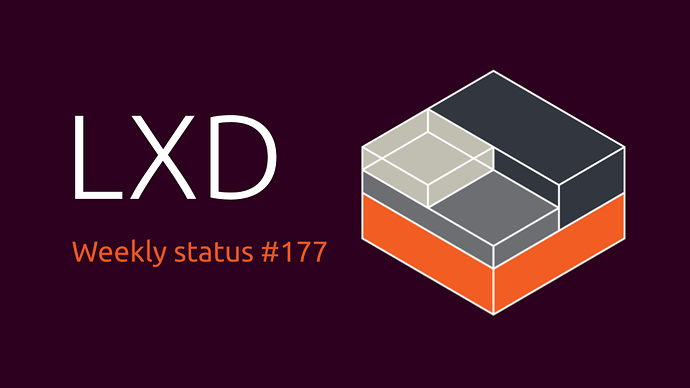 This past week has been focused on general improvements and code cleanups.

Log messages emitted by the instance drivers (LXC and Qemu) have been converted to use our contextual logging library that we use. This means that these messages are consistently labelled with the name and project of the instance, to avoid any confusion when running multiple instances of the same name in different projects.

The UsedBy field in the API is now being filtered to remove entries that are not accessible by the user (when using RBAC). These URLs were never accessible, but now we don’t even list that they exist for users who cannot access them.

A default content type of filesystem has been added to the /1.0/storage-pools/{name}/volumes route so when creating custom filesystem volumes one does not need to specify the content type (now that we support block custom volumes too).

Following on from last week’s addition of the network cluster node state, the groundwork has also been laid to apply the same concept to storage pools by moving the ClientType concept into its own package (to avoid import loops when used in the storage package).

In some situations Qemu was trying to access NSS related files and /proc/version which were being denied by AppArmor, so this has now been relaxed to allow access to these files.

An issue when running a container inside another container when both have LXC_NET_NONE has been fixed.

This past week @stgraber has demonstrated how to use Steam inside containers: