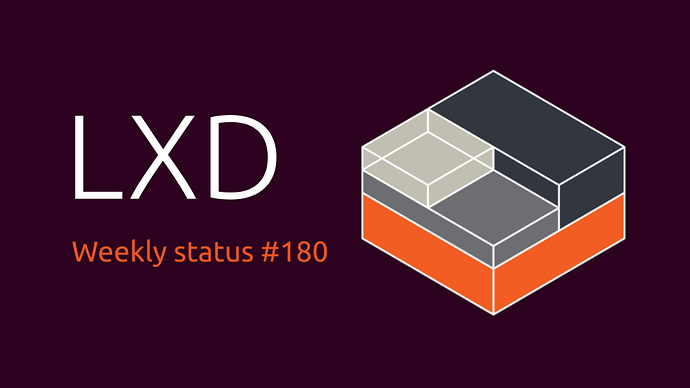 The LXCFS release is part of its 4.0 LTS series which is supported until June 2025.
Please see the release notes for more information.

This past week the OVN network feature gained some improvements.

The random-stable priority generated is derived from the network ID and member ID, meaning that a different priority will be used for each OVN network in the cluster. The aim for this is to distribute the primary uplink gateway chassis used for OVN networks across the cluster members, rather than using the same member for all OVN networks.

Additionally when updating OVN network config, previously the entire OVN northbound config was deleted and rebuilt using the updated config. Unfortunately this was causing problems when using Instance NIC level static routes which would also be removed and not re-added until the Instance was restarted.

To fix this we have made the OVN update process less destructive, and now it selectively updates only the parts of the config that have changed and leaves intact the rest.

Also related to this, OVN networks depend on an “uplink” network to get external connectivity. However before when the config of these uplink networks were changed, the effects were not applied to the dependent OVN networks until the next time the OVN network was modified. This has now been improved to add the concept of dependent network notifications so that changing the dns.nameservers or ovn.ingress_mode setting on an uplink network will update the relevant settings on the OVN networks that depend on it.

Background operation names have been updated to remove references to “container” and have been changed to “instance” to reflect that operations can be happening on both containers and VMs.

There have also been some bug fixes for issues copying instances with snapshots to remote systems.
Firstly any snapshots with expiry dates were having their expiry dates removed when they were copied. Secondly snapshots that had device config were intermittently having some of their devices removed during remote copy. Both issues are now fixed.

When performing an lxd import container recovery after, the storage quota was not being re-initialised. This was causing problems when importing a directory based container using ext4 project quotas, as the project quota ID is derived from the DB volume ID, and during import this ID was being changed due to new DB records being created. We now re-initialise the storage quota for a container when doing an import to fix this issue.

This past week LXC has had improvements made to its capabilities handling code, including adding support for the following capabilities: CAP_{BLOCK_SUSPEND,PERFMON,BPF,CAP_CHECKPOINT_RESTORE}.