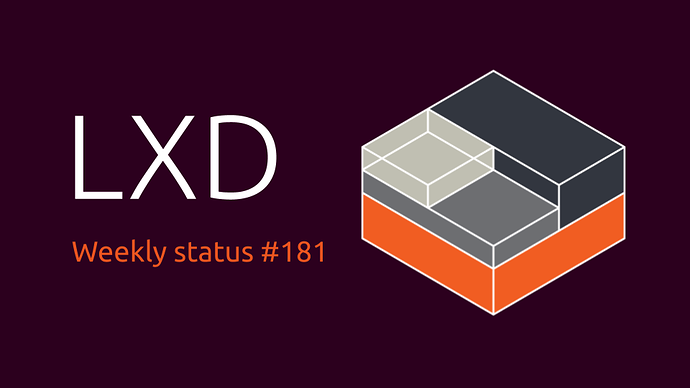 The highlight of the past week was the release of LXC 4.0.6 LTS.

This is the sixth bugfix release for LXC 4.0 which is supported until June 2025.

This past week has primarily been focused on bug fixes and improvements.

We have extended the functionality of the lxc network attach ... command to allow attaching instances to all types of managed networks (macvlan, physical and ovn) rather than just the former bridge type. This change also affects the attach behaviour for bridge networks. Previously it was generating a device config in the instance using the parent property and now it is using the network property. This approach allows for certain config keys on the specified network to be applied to the instance NICs, as well as improving validation of the NIC against the functionality provided by the network.

Two bugs in the ceph storage driver have been fixed. Firstly the instance rename functionality was not renaming both the config and block volumes for VMs. Secondly the unmount instance volume was not properly clearing up the VM block volume device.

If the --project flag is provided when using the lxc query command we now present an error as this has never done anything, as the nature of the command means that lxc itself does not influence the URL being queried. It expects the project to be specified directly using the project query string parameter.

On the LXC front, a small, but potentially disruptive change was made to prevent the dnsmasq process that is spawned as part of lxc-net script from using the system’s config file at /etc/dnsmasq.conf. If the old behaviour is desired then it can be restored by setting LXC_DHCP_CONFILE=/etc/dnsmasq.conf in /etc/default/lxc-net.