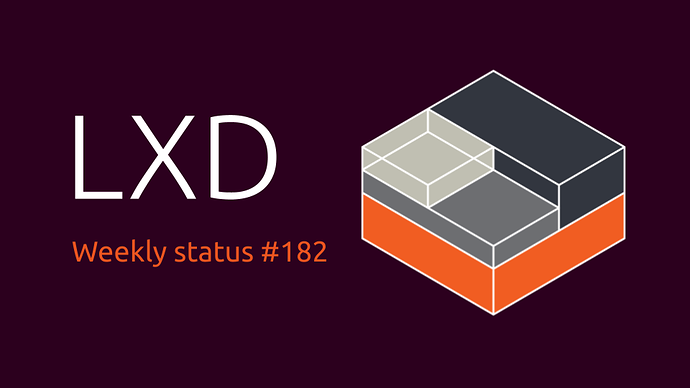 This past week LXD has gained several new features and the usual range of improvements and fixes.

It is now possible to move instances between storage pools using the following command:

or to move and rename at the same time:

You can now make bulk state changes to multiple instances via the API (using PUT to /1.0/instances endpoint).

We have also added support to the lxc start --all command so that it is now handled server side when supported.

On the networking side, GVRP support has been added to macvlan, physical, and ipvlan NIC types, and macvlan and physical managed networks. GVRP stands for Generic VLAN Registration Protocol, and allows instance NICs with the vlan property to register themselves against a switch that supports GARP to request that external port joins a particular VLAN automatically without having to manually configured the switch.

As part of our ongoing project to add Windows VM support to distrobuilder we have modified the way that LXD exposes disk devices backed by .iso files. We now expose them as SCSI CDROMs rather than SCSI disks.

There have been several improvements to validation; routed NIC devices now check for duplicate addresses specified (and more thoroughly clean up neighbour proxy entries added to the host), root disk size validation is checked earlier before it is used in the storage layer, and OVN IP ranges configured on a bridge network are now checked that they don’t overlap with the DHCP ranges also defined on that network.

An issue that prevented deleting an instance using a bridged NIC connected to a managed LXD bridge when the bridge interface itself had been deleted has now been fixed.

During a load test, it was found that volatile NIC hwaddr and name keys generation were liable to intermittently during instance creation fail due to database contention. This has now been fixed by adding retries to these code paths.

An issue that prevented adding GPU devices to a profile has been fixed.

A repack-windows command has been added, allowing you to build a LXD compatible Windows VM ISO file.

The resulting ISO generated can then be used as a disk device attached to a VM to boot off to install Windows.