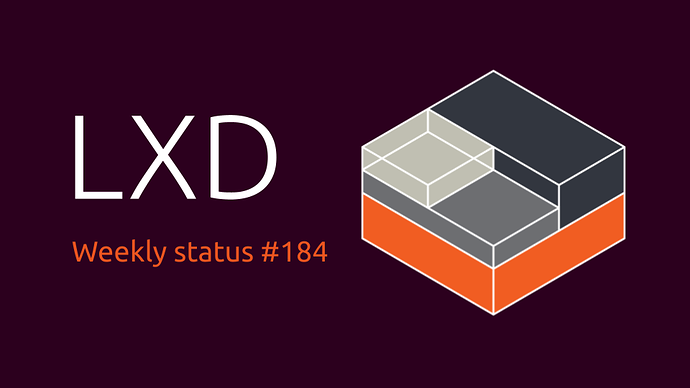 The LXD 4.0.5 release is part of the 4.0 LTS series which is supported until June 2025.
Please see the release notes for more information.

In addition to the releases, there has also been a focus on API improvements, with the following changes:

On the VM front we have also added improvements for our Qemu QMP protocol handling to lay the foundations for stateful stop of a VM, as well as fixing a crash with virtiofsd when sharing a directory between the host and a VM with CPU limits in place due to an inconsistent use of ram and memfd.

An improvement to the LXD container’s default seccomp filter was added to block openat2 syscalls when seccomp syscall supervision is enabled. And a potential scenario where LXD could leave zombie processes around when an attach to a container fails has been fixed.

Work has started to switch all of LXC to only operate on file descriptors instead of paths whenever possible. This work will be ongoing over a couple of weeks or months and will focus on making extensive use of the new lookup restrictions that openat2() provides. The goal is to enable LXC to always do lookups and file or directory creations relative to a well-known and safe starting point and scope all further path resolution beneath this safe starting point, returning an error when an escape is detected. Part of this work is the switch to the new mount api which allows for file-descriptor based mounting.