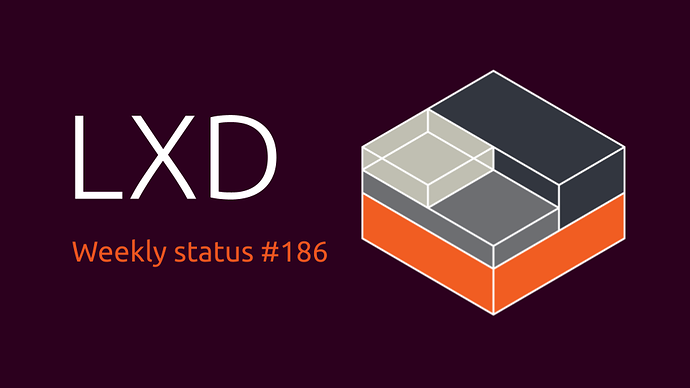 LXD now supports assigning one or more projects to a trusted client certificate, with the effect of restricting that client certificate to the equivalent of the operator role on those projects, and denying access to any other projects.

Following on from the initial Netwok ACL database schema and API endpoints added last week, this past week has seen OVN networks again ACL support. Once ACLs have been created using the lxc network acl create command, they can then be assigned to OVN networks or NIC devices by setting the security.acls config property. ACLs assigned to networks will be automatically assigned to all NICs connected to that network.

We have begun moving our REST API docs to a swagger based automatic generation from the actual code structures and comments. This way the API docs will be kept up to date with the actual API endpoints rather than requiring manual updates each time an API change is made. It is still a work in progress, but to get an idea of how it will function take a look at https://dl.stgraber.org/swag-lxd/

There have also been the usual set of fixes and improvements:

The work hardening the use of cgroups, fd-only codepaths and mount restrictions has continued apace.

Several improvements to better support Windows ISO rebuilds were added in the past week, including support for Windows Server 2016.

Also, the RunScript functionality has been updated to write the script to execute into a temporary memfd in order to support executing the script using a different interpreter than sh which was previously hard coded.

Several bugs have been fixed in relation to barriers which were causing crashes in certain scenarios.