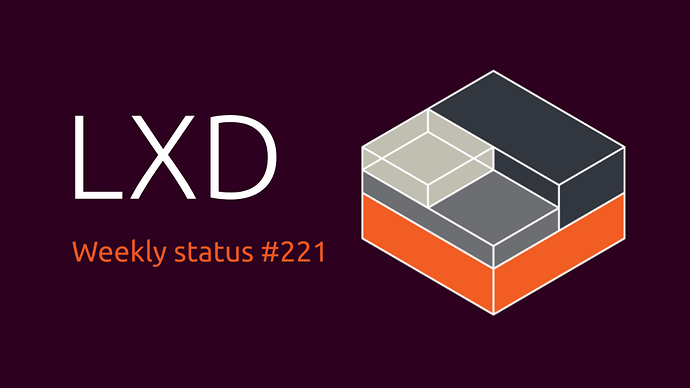 This past week has been a busy one for LXD. It has gained two OVN networking features (network to network routing and network source address spoof protection), as well as support for fanotify for filesystem events watchers, and partial support for VM stateful migrations. In addition to that there has been a focus on improving cluster failover reliability.

@stgraber has added a new video covering deployment of LXD clusters with Juju: There’s been a focus on improving the reliability of clustering fail-over this past week. It was observed that if the LXD dqlite leader became abruptly unreachable by the other cluster members (perhaps if it went offline or there was a network issue), in some cases if there was data still in the TCP send queue of the DB connection that the remaining cluster members would block for up to 15 minutes before failing the ongoing query and recovering. During that time all operations that required DB access on those members would block. This, to most intents and purposes, effectively prevented fail-over from occurring for up to 15 minutes. The reason for this is because the data in the TCP send queue was preventing the normal TCP keep-alive timers from taking effect and the OS’s TCP re-transmission timers were taking precedence. These by default keep trying to re-transmit the data to the unreachable server for 15 minutes.

At the same time we also observed that the LXD event connection from the unreachable server was also hanging around blocked for 15 minutes.

Please could someone elaborate on this, I’ve had a socket open for a while now and I’m not seeing any pings? Perhaps the node websocket implementation auto magically handles this?

Im using snap version git-54ed3dc which appears to have the aforementioned fix.

So the heartbeat implementation is here:

This file has been truncated. show original

I had seen the code but probably should have paid more attention, as we both suspected the ws node package appears todo this automagically.