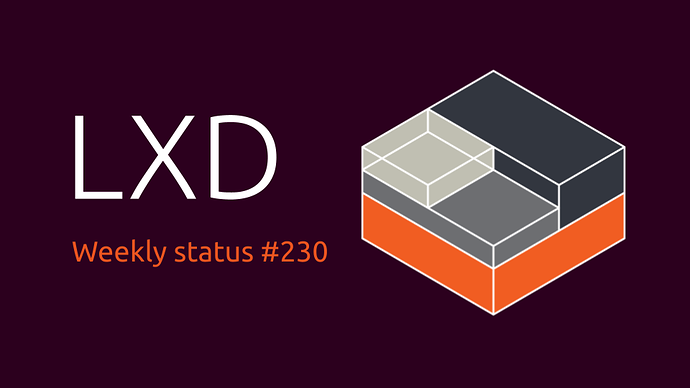 First status update of the year. This one covers a bit more than a week and stretches all the way to December 20th.

On the LXD front, work continued on the new mechanism to distribute cluster events but we also got to include some smaller features and improvements:

For LXC, we just got a couple of bugfixes around the seccomp notifier.

In distrobuilder, we fixed systemd overrides to better handle calls to udevadm and fixed some issues with cloud-init network config generation.

And on the dqlite side of things, we fixed some documentation issues and corrected bad handling of timestamps with timezones.

Lastly, we also published a YouTube video going over our plans for LXD 5.0 LTS: We’ve just merged a new lxd-user daemon earlier today which will allow for environments where every user on a desktop system will automatically get a restricted LXD project that gives them access to their home directory and uid/gid without giving them access to anything that could be used to take over the entire system.

That can then be used by distributions to provide an immediately consumable LXD environment without any need for lxd init or any configuration, login as a user on the system and you can lxc launch stuff.

Not quite what I expected but, nice! Can see that helping improve adoption / first run to no end

While i’m chucking out free compliments, the “desktop” VM images (quite old now) work much better than the “old images” with a desktop installed later - thanks for building & serving those