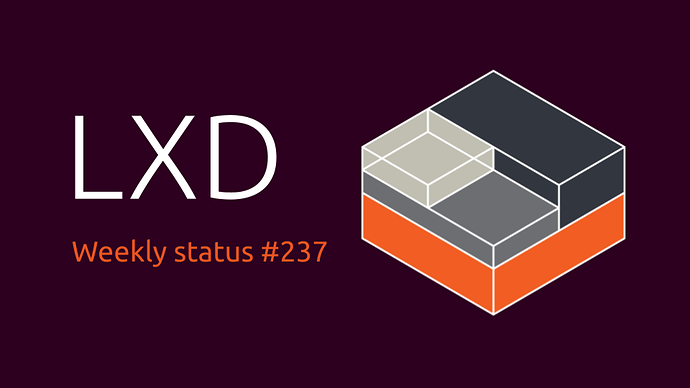 This past week we have merged the Event Hub feature from our LXD roadmap, as well as making significant progress on our File Streaming API roadmap item. Additionally we have added the ability for the VM lxd-agent to rename network interfaces inside the guest using the LXD device config names.

Additionally @stgraber has created a video on the new token based authentication for LXD remotes. Above mentioned network mesh might work with very limited number Hosts, all in one rack.or even immediate neighbours.
Though it is not easy cross connecting servers by those set of tp cables and even more difficult when hosts in some distance.
We have implemented a private network throughout data center with dedicated 10g/40g switches.

Problem is, lxd either listening on all ( ip4/22, ip6/48) which is not desirable or only one dedicated ip.
So, servers need to go through congested public net, despite being privately connected as well.
Lxd listen on multiple defined IPs or NIC based would solve that problen.

So, servers need to go through congested public net

What traffic are you referring to? LXD API traffic?

lxd core.https.address
takes either 1 dedicated ip address or wildcard.
Wildcard binds on *:8443 causes an open port an all available host NIC and IPs.

In a cluster I believe you can set the cluster.https_address setting to a different IP (and thus network) than the core.https.address and that the former would be use for private intra-cluster communication.

As for binding core.https.address onto multiple addresses (and not the wildcard) please could you log a feature request at https://github.com/lxc/lxd/issues

The choice right now is either one IP Address or wildcard (*) which causes lxd l…istening on whatever a host binds on all interface. That in in some cases could be a wide range/large blocks of private and public IPv4/Ipv6. By allowing selected multiple addresses in a non-clustered mixed infrastructure, neighbor hosts could communicate via intranet whilst remote servers access over a specific IP Address or NIC. core.https.address : 127.0.0.1:7443,192.168.1.101:8443,8.8.8.8:8443 core.https.address : eno1:8443,eno4:8443