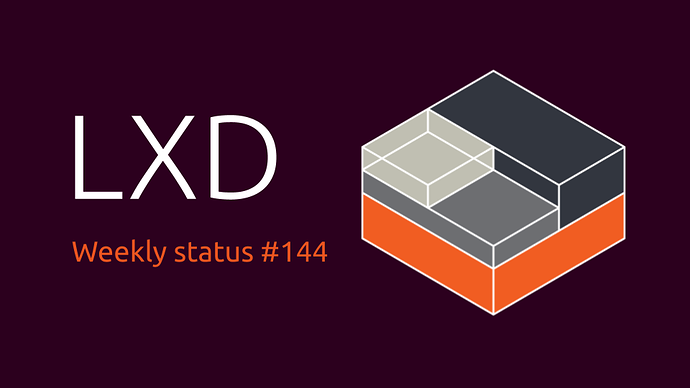 LXD
On the LXD front we have added several new features:

e.g. Using a routed NIC with a custom routing table ID of 100.

Layer 2 mode support has been added to ipvlan NICs. This allows ipvlan NICs to specify their own default gateway rather than using the host’s default gateway config. It also allows limited DHCP support at layer 2, as long as the DHCP client supports using DUID client IDs rather than MAC address. This also doesn’t need to use proxy ARP/NDP on the host and allows containers to add additional IPs without notifying the host (this is also possible in l3s mode, but due to the way proxy ARP/NDP is setup, only containers running on the same host will be able to use the new IPs added).

Additional system information has been added to the resources API.

An issue that prevented adding several NICs to a VM has been fixed. A VM can now have up to 8 NICs added to it.

We have removed the loading of the br_netfilter kernel module when using the bridged NIC security.ipv6_filtering option as this can cause unexpected traffic filtering on unrelated network connections (as the default behaviour when the br_netfilter module is loaded is to pass all traffic through the netfilter framework). Instead we just check if the module is loaded and configured as needed and if not generate an error.

Finally, an issue affecting renaming instance backups has been fixed.

LXC and LXCFS
The focus for LXC and LXCFS last week was continuing to fix cgroupv2 related issues.

Distrobuilder
Some fixes related to Gentoo and OpenWRT source checksum matching were added. As well as a fix for Funtoo image and GPG key URLs.