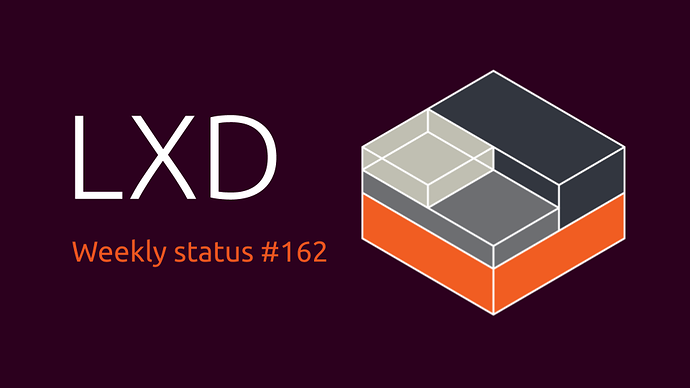 The highlight of the past week was the release of Distrobuilder 1.1. Please see the release notes for more information.

This past week’s main developments have been around the OVN software defined networking feature. Support for internal DNS names for instance’s using OVN’s built in DNS server was added, as well as a work around for reaching the IPv6 gateway when using SNAT on older versions of the OVN host controller (that includes the version currently in Ubuntu Focal). The default MTU for OVN instance ports has also been lowered to 1442 to resolve packet loss issues when using geneve overlay network tunnels. OVN support was also added to the snap package which is now available in the latest/edge channel. Please see OVN section in the Networks docs for more info.

On the container front support was added for attaching to a container’s namespaces using pidfs, which avoids the possibility of attaching to the incorrect namespace when PIDs are being reused quickly.

On the VM front the vga console was fixed in Windows and a migration issue affecting VMs on ZFS storage pools has been resolved.

There was also the usual assortment of fixes including a fix for shrinking an ext4 filesystem volume failing due to a missing lost+found directory and a fix that prevented creating multiple instances of the same name on two different storage pools in different projects.

In LXC this past week there was a fix for attaching to a cgroup after cgroup creation and some documentation clarification improvements.

As mentioned above Distrobuilder saw its 1.1 release which included adding some documentation around the generation of VM images.