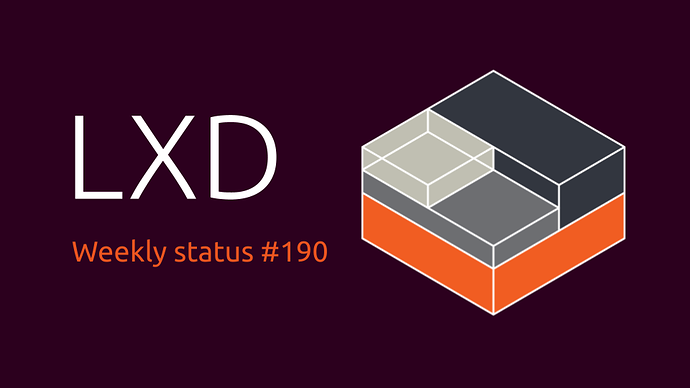 This past week saw the release of Dqlite Raft library 0.10.0, and LXD’s OVN feature saw the removal of the default ACL action concept for ACLs replaced with per-network and per-NIC default actions, as well as a change in the generated rule priorities, which will require existing ACLs to be reapplied to the OVN northbound database.

The OVN networking ACL feature in LXD saw some significant (and non-backwards compatible changes) this week. Firstly, a change to the generated rule priorities (to workaround an issue caused by OVN adding reject rules with a higher priority than specified causing priority overlaps) means that existing ACLs will need to be reapplied to the OVN northbound database. The easiest way to do this is to modify the description of the ACL, as this will trigger a refresh.

Secondly, the default.action and default.logged settings have been removed from ACLs. These have been replaced with per-network and per-NIC security.acls.default.{in,e}gress.action and security.acls.default.{in,e}gress.logged settings. The NIC settings will override those on the associated network. This was changed to improve the user experience of controlling the default behaviours for unmatched traffic when multiple ACLs have been applied (as ACLs do not have ordering and so reasoning about which ACL’s default behaviours would take effect was not predictable).

An issue that was causing manually created images inside projects to be deleted has been fixed. This was caused by a regression in the way that auto expiring of cached images for projects was handled.

On the storage front, an issue accessing the BTRFS device used on top of LVM when using the SNAP package has been worked around.

An issue that prevented lxc exec working in LXD when a cgroup was created after a container has been started has been fixed in LXC.

An issue that was causing /proc/cpuinfo and /proc/stat to be truncated to 4096 bytes which was limiting the output for systems that have >4 CPUs has been fixed.

Distrobuilder has been updated to support gomod and has had proper logging support added. Additionally an issue that prevented the --cleanup flag from working when there were build errors has been fixed.

Dqlite 0.10.0 has been released which adds the raft_set_install_snapshot_timeout call to the API.

Support for compiling on MacOS using clang has been added.